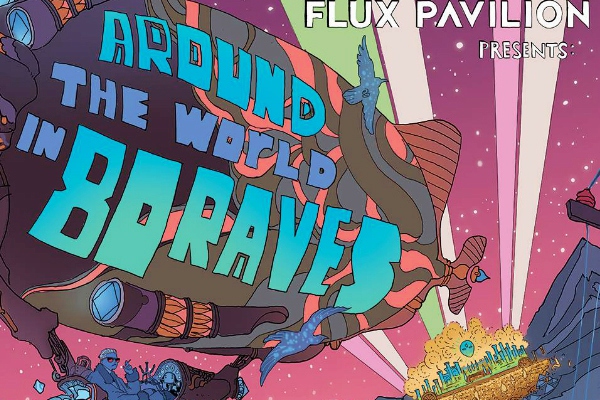 Flux Pavilion – Around the World In 80 Raves – In 1873, Jules Verne penned one of the most read books of all time, “Around the World 80 Days,” which has existed in many guises and two months ago, Flux Pavilion announced that he was going to bring own interpretation of the literary classic to the masses by embarking on a journey to travel the world in 80 Raves! With illustration and visual inspiration from Jack T. Cole, this tour will be Flux‘ most audacious to date.

Get Tickets At Select Events Here

With it’s first leg having been in Australia and New Zealand this past March, London’s modern incarnation of Phileas Fogg is now set to travel to North America where he will embark on over 40 of the raves. For every Fogg there is a Passepartout as wingman and an ever-changing entourage, during the journey across America, Flux Pavilion will be joined by an array of electronic talent.

The special guest throughout the tour will be Kayzo, the LA based man behind Doghouse Recordings, which is one of the hottest dance-floor properties right now. Joining the two travellers on rotation over the tour are Moksi, Spag Heddy, Trollphace, Wilkinson, Fransis Derelle, G-Buck and Jaykode.

Flux Pavilion is no stranger to touring the United States on a bus, but on this tour he’s on a one-man mission to change the game. With next level production and a number of surprises in store, Around the World in 80 Raves promises to be an unforgettable moment in the history of modern bass.