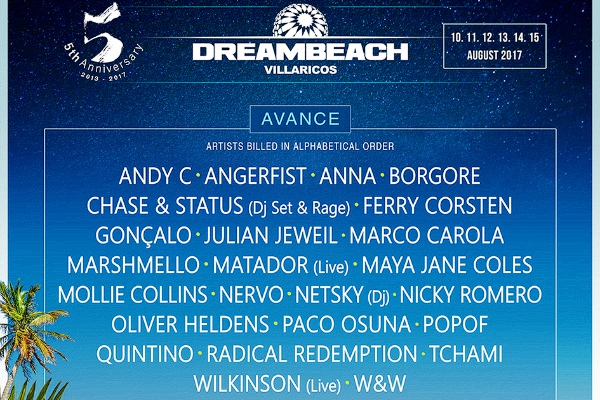 Dreambeach Festival 2017 – Ahead of its fifth-anniversary celebrations, Dreambeach Festival have announced the first wave of names for their beachside festival set to take place on 10-15th August 2017. Having already sold 12,000 tickets shortly after closing an astoundingly successful 2016, the organizers have decided to reward a second-to-none fan base from all four corners of the world with a heavyweight, 20-act phase one.

Giving an insight into what an inviting fifth year 2017 will be, phase one is an ignited sortie from across the electronic spectrum. Representing all manner of massive and maximal music, the line-up announcement is a mashup of epic proportions with D&B represented in Chase & Status and Andy C, special live sets coming from Matador and Wilkinson, big names of big room Nicky Romero, Marshmello, and NERVO, whilst Maya Jane Coles and Marco Carola among the underground offering.

Another of the novelties of this 5th Anniversary will be a spectacular, scenographic production not only on the stage, but in an enclosure that will be transformed into a real paradise. A theme currently being crafted, in which every aspect of the architecture will be built into this recreational dreamscape for the “dreamers,” Dreambeach 2017 promises to be even bigger than ever before.