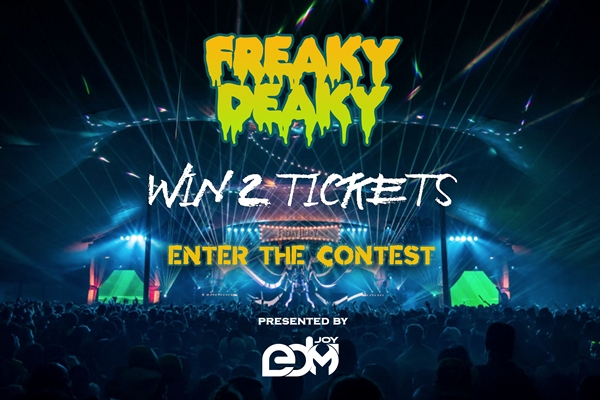 Freaky Deaky Ticket Giveaway – The largest halloween event in the midwest is thrilled to announce the complete artist lineup for its eighth anniversary! The 3-day festival returns to the expansive Toyota Park just outside of downtown Chicago in Bridgeview, Illinois over Halloween weekend. Featuring 50+ artists spanning multiple genres, Freaky Deaky 2016 promises a chilling and thrilling experience that will bring the freak out of everyone this October.

Tickets are on sale now at freakydeakyhalloween.com!

Alongside the lethal array of headliners, hip hop makes its mark on this year’s festival as TRAVIS SCOTT is set to make moves in celebration of his forthcoming album, Birds In The Trap Sing McKnight, along with DESIIGNER, best known for his Billboard Hot 100 No. 1 single, ‘Panda,’ and wunderkind producer METRO BOOMIN who promises to bump some of the hottest beats from the past two years. A$AP FERG, fresh off of his widely acclaimed album Always Strive and Prosper, will follow suit, while New York trio FLATBUSH ZOMBIES and Freshman XXL 2016 honoree LIL DICKY both make their coveted return to Chicago after each of their massive sold out shows at Concord Music Hall.

Throughout the weekend, the Crypt Stage will transform each night to highlight a diverse scope of dance music’s most noteworthy contributors. On Friday, October 28, dubstep veteran and original Evol Intent member BRO SAFARI taking the lead with the best that bass music has to offer. Bass lovers are sure to find refuge when fellow dubstep creators FIGURE, CRIZZLY and ILLENIUM join the renowned trap stylings of duo LOUDPVCK and 4B.

On Saturday, October 29, fans will discover an unforgettable blend of live electronic music on this dynamic stage, with 3D animation and live lighting from the DUBFIRE HYBRID:LIVE showcase. Alongside him, an all-inclusive blend of deep house, hip hop and techno will be represented by the likes of CLAPTONE, MK, BRODINSKI and KILL FRENZY.

Closing out the Cyrpt Stage on Sunday, October 30 is house music pioneer JAMIE JONES. Known for his ground-breaking Hot Creations label and global event series, Paradise, Jamie will play alongside his cross genre hot natured bandmate and native Chicagoan, LEE FOSS. Fellow house and techno cornerstones GUY GERBER, ARDALAN and GENE FARRIS will support the takeover to provide underground aficionados with their very own sanctuary for the day.

Each year, Freaky Deaky provides an unmatched atmosphere with its inclusivity and powerful visual spectacle. In addition to three epic stages, which showcase their own unique, eye-popping designs, festival attendees promise to be immersed in droves of costumed performers, artful pyrotechnics, and a wide assortment of devilish food and drink vendors.