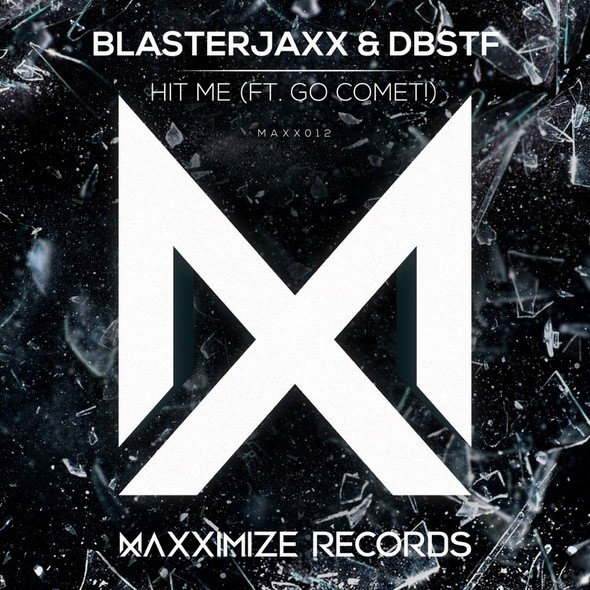 Blasterjaxx DBSTF Hit Me – Following the success of their trancey banger Parnassia (4 million plays and counting), Blasterjaxx team up once again with fellow Hague duo, DBSTF, for another epic slab of dancefloor gold.

The track kicks off with a mellow rock style vocal from Go Comet! and acoustic guitar, the emotion and energy building towards the bridge as piano chords are drawn in and the vocal harmonies lift things up higher. The drop delivers a typically soaring lead line, the sort these four producers can always be trusted to whip up, whipping up a frenzied feel over a driving bassline that follows a similar melody.

The final section chunks up the bassline further with an additional layer of guttural power that sounds almost like an electric guitar, cleverly complementing the now-powerful rock vox. It’s a perfect, potent blend of dancefloor prowess and classic radio songwriting that gives it a great shot at being a serious global hit.

This double duo also collaborated previously on the massive Beautiful World with Ryder in early 2015, which has amassed over 6.5 million plays on YouTube alone. Clearly, it’s a partnership with major pedigree. Go Comet!, meanwhile, is an upcoming singer who has featured on Botnek’s Tremors on Steve Aoki’s Dim Mak Records last year.

Catch Thom from Blasterjaxx bringing the sound of the duo to Electric Zoo, Tomorrowland, Creamfields, Parookaville and AirBeat One amongst others this summer.

Blasterjaxx & DBSTF ‘Hit Me’ (feat. Go Comet!) is released on August 1 on Maxximize Records and available on Beatport and here: https://maxximize.lnk.to/HitMe

W&W: “Support on our radioshow!”

Nicky Romero: “Support on my show!”