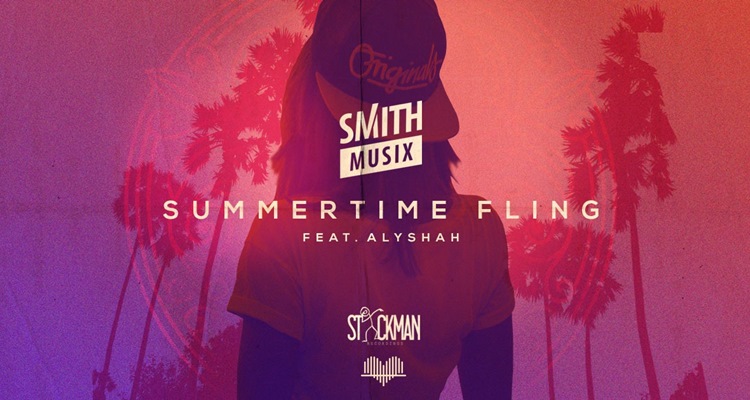 Producer and DJ, SMiTHMUSiX, also known as STiCKMAN is the founder of indie record label, STiCKMAN RECORDINGS. While he produces pop, hip hop, and R&B on the side, as SMiTHMUSiX, he is establishing himself as a trap producer. The first track he released was a remix of the track, ‘Up & Down,’ which featured heavy dubstep sounds with an intense trap beat. Now he has released ‘ Summertime Fling,’ which definitely show heavy pop influences with soulful vocals from folk singer and songwriter, Alyshah.

As a singer and songwriter with a guitar, Alyshah started her music career about two years ago or so. She is a beautiful vocalist who started playing her guitar with genres such as indie-rock, folk rock, and genres with other various acoustic sounds. Her notable tracks are ‘Whisper‘ and ‘My Lovers Mask.’ About five months ago, she released her first electronic dance music influenced track by covering Melanie Martinez‘s track, ‘Sippy Cup,’ featuring rapper, YK. Since then she has released a house track called ‘Nothing Lasts Forever,’ which is a collaboration with DJ and producer, Auracle.

This track has the purpose of creating summertime memories and bringing back those memories most of us have encountered at least once in our lives. That moment when you’re on vacation and fall head over heels for someone and experience total freedom, life and love itself to the fullest. – SMiTHMUSiX

SMiTHMUSiX has created soothing vibes with a professional sound that gives the vocalist, Alyshah, a chance to really shine with her liquid, delicate voice. ‘Summertime Fling‘ is an encompassing tropical house track that establish SMiTHMUSiX‘s pop influences, while still holding true to electronic dance music’s newer house sounds, invigorating beat, and bass. These artists are bound for success, they just haven’t quite created those memories yet.