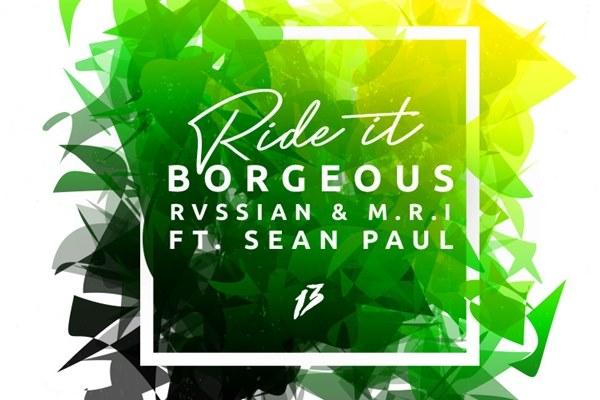 As the latest team-up of music industry titans, Borgeous’ single ‘Ride It’ with Rvssian, M.R.I., and Jamaican superstar Sean Paul has finally seen its highly-anticipated release. Unleashed on Borgeous’ new label Geousus Records (which operates under the wing of Amsterdam-based record company Armada Music), the record is hyped up by an official music video in typical Sean Paul style.

‘Ride It’ not just marks the first release on Borgeous’ new imprint Geousus Records. The record also builds toward his soon-to-be-released debut album as its lead single. ‘13’, as the full-fledged body of work will be called, is set for release on August 13th.

In addition to Sean Paul, ‘13’ is brimming with other acclaimed guest artists and collaborators, including Lil Jon, Neon Hitch, Fatman Scoop, Rvssian, M.R.I., Lauren Dyson, Ashley Wallbridge, 7 Skies and others. The long and diverse list of cross-genre collaborators doesn’t come as a surprise though; Borgeous has worked with a lot of high-profile artists in his enduring career so far, including Wiz Khalifa, Waka Flocka Flame, DVBBS, Dimitri Vegas & Like Mike, Tinie Tempah, and Lights.

For the last three years, American songwriter, producer, and DJ Borgeous (John Borger) has seen an astronomical rise to fame. The L.A. and Las Vegas-based artist garnered three Billboard Dance Radio Top 10s, three Beatport #1s, and a #1 on the iTunes Dance Charts in fifteen different countries among other accomplishments. ‘Tsunami’, his biggest hit to date, earned him an EMPO Award for ‘Track Of The Year’ and a Juno Award for ‘Best Dance Recording Of The Year’.