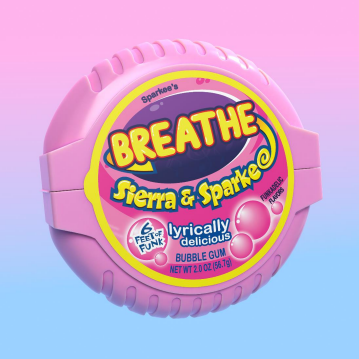 Canadian artist Sparkee is back with his newest artistic creation; this time Sparkee teams up with rising producer and vocalist Sierra for their disco inspired track, “Breathe.” A perfect end of summer tune, “Breathe” is complete with funky basslines, groovy guitar work, and Sierra’s soulful pop/R&B vocals.

“Having been a fan of Sparkee’s past releases, the opportunity to collaborate was an easy yes! When I heard the instrumental I instantly knew it was the one and the song practically wrote itself. Super excited to give everyone one last banger before the summer ends” – Sierra

Teaming up for their first track together, Sierra and Sparkee prove to be a perfect duo. Combining both of their production styles, the listener can hear Sparkee’s signature sound along with Sierra’s synth layers and production arrangement.  ‘Breathe’ is the second single off of Sparkee’s much anticipated ‘Snack Pack’ EP expected to debut this Fall.

Jesse Allen professionally known as Sparkee is an award nominated music producer, guitarist and artist from Halifax on the east coast of Canada. Arriving on the scene in 2018, he has amassed over 10 million streams to date via original releases and remixes. In 2021, Sparkee kept himself busy throughout the pandemic, releasing one remix per week for all 52 weeks of the year. The highlight of those was his contest winning remix of Tiesto’s ‘The Business’ which was officially released on Musical Freedom/Atlantic Records and has amassed over 2.7 million streams to date. Over the years, Sparkee has developed a unique sound that incorporates elements of disco, funk, and rock music which can concisely be summed up as “Daft Punk meets Van Halen”!