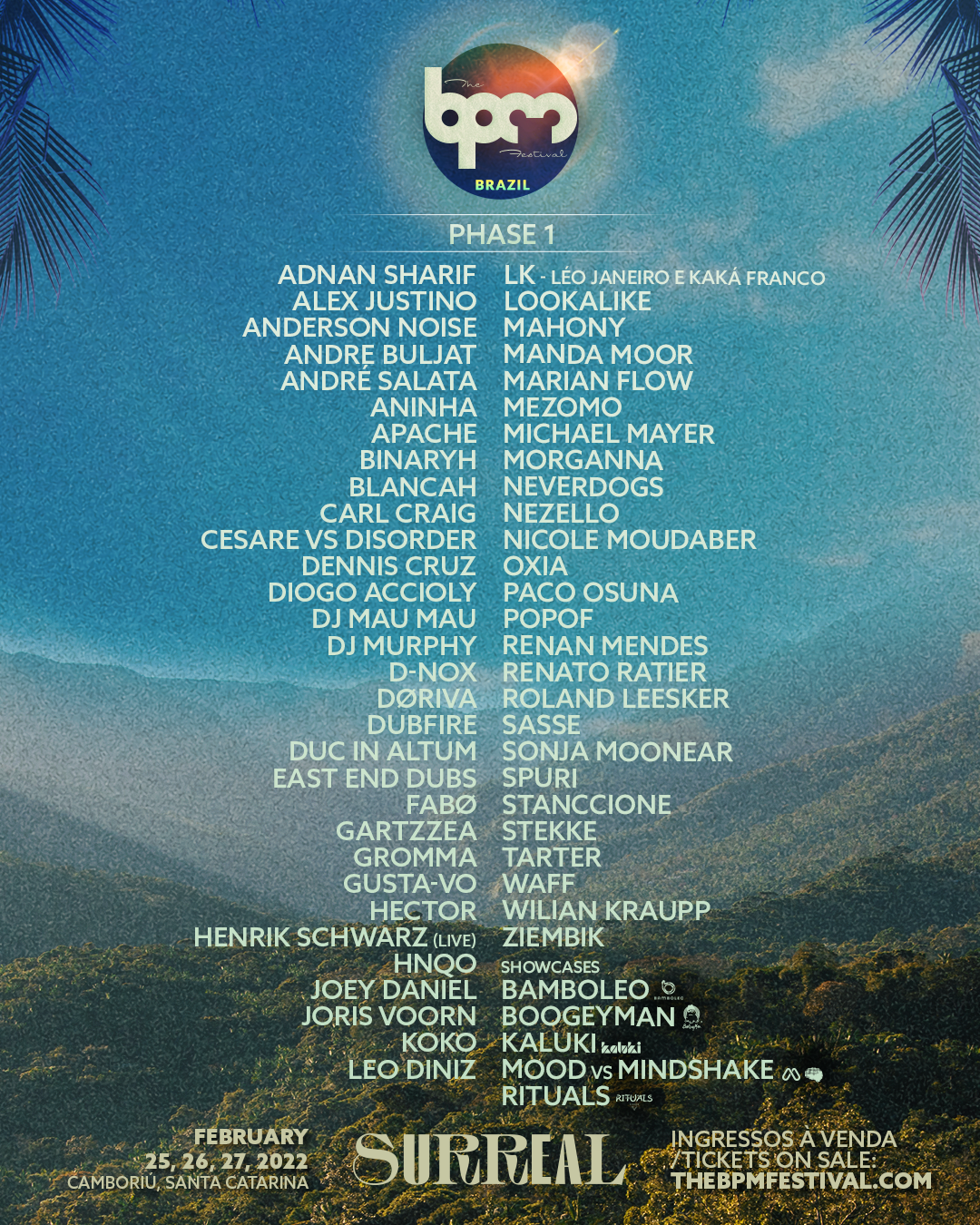 Commemorating its fifteenth anniversary, The BPM Festival prepares for its biggest year yet in 2022. Following the highly-anticipated sophomore Costa Rican event in January, the mammoth global event brand will host its debut Brazil edition in Camboriú, Santa Catarina. Bringing the magic of The BPM Festival to a new home, the brand unveils a star-studded phase one lineup with some of the world’s most beloved house and techno acts including Carl Craig, Dubfire, Henrik Schwarz (live), Joris Voorn, Nicole Moudaber, Paco Osuna, and wAFF. The event is slated to take place from February 25-27th, 2022 at the new state-of-the-art venue, Surreal, which was created under the direction of iconic D-Edge owner, Renato Ratier.

As The BPM Festival embarks on a new path with the addition of the Brazil event, it’s only fitting that some of the most coveted names kick off the debut edition. In what promises to be one of the most exciting events of the year, The BPM Festival welcomes over 50+ household names from the global dance music sphere for its phase one lineup. Fan-favorite returning artists include Detroit techno royalty, Carl Craig, Cologne producer, and Kompakt signee, Michael Mayer, British-Lebanese mainstay Nicole Moudaber, and Spanish talent Paco Osuna, along with many more. The BPM Festival: Brazil will also feature alluring performances from leader of the underground Dennis Cruz, Dutch house legend Joris Voorn, and Swiss minimal star Sonja Moonear, and a live performance from genre-bending German producer Henrik Schwarz. Brazil’s burgeoning underground scene will be represented by BLANCAh, DJ Murphy, Duc In Altum, Renato Ratier, Spuri, and many more. Staying true to the legacy of the brand, The BPM Festival: Brazil will feature unique showcases from Italian DJ duo Neverdogs’ Bamboleo imprint, The Martinez Brothers’ sub-label, Boogeyman, English event series, and label Kaluki Musik, Moudaber and Osuna’s MOOD vs. MINDSHAKE, and Sounds of Rituals own Rituals.

With more names and showcases to be announced, the phase one lineup for The BPM Festival: Brazil boasts a strong foundation for the inaugural event. Dedicated fans and music lovers can prepare for a one-of-a-kind celebration, as the festival coincides with Brazil’s annual Carnival festivities. Not only will the festival be the first of its kind, but it also continues the official opening of the new immersive venue, Surreal. Under the leadership of South American dance music innovator Renato Ratier, owner of the legendary D-Edge in São Paulo, Surreal will offer 92,000 square meters of immersive event space that can be completely redesigned to accommodate any number of events. The massive artistic complex will serve as the perfect venue for the elevated experience that The BPM Festival has become known for over its fifteen years.

For those looking to attend the inaugural edition of The BPM Festival: Brazil, 3-day general admission tickets are available for purchase now at TheBPMFestival.com. International festival-goers will be able to fly into either Navegantes Airport (NVG), which is a short 45 minutes away from the venue, or Florianopolis (FLN), 90 minutes from the venue. Descending on the lush location of Camboriú, the coastal city offers stunning views of Brazil’s beautiful beaches. The popular tourist destination proves to be the idyllic location for The BPM Festival with an unparalleled balance between intriguing nightlife and breathtaking scenic views.

The BPM Festival, now going on its 15th year, has seen previous editions take place in Mexico, Portugal, Costa Rica, and now Brazil. Having just announced the final artists and showcases, The BPM Festival: Costa Rica, taking place January 12-18, 2022​, returns to the charming Tamarindo coast with its stellar production, eclectic crowd, and an inimitable musical lineup full of house music and techno’s greatest. Continuing the momentum of the anniversary, those looking to experience even more of the stellar BPM ambiance won’t have to wait much longer, as the inaugural Brazilian edition will kick off in Camboriú the following month. Boasting a state-of-the-art venue and astonishing views, The BPM Festival: Brazil will solidify another milestone for the world-renowned brand.