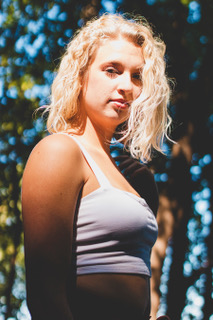 Signe is a solo pop artist who grew up dancing her heart out to ABBA, singing along to Sara Bareilles and falling in love with the lyrics of Billy Joel. These influences have manifested in her work to create a sound that is firmly grounded in the pop-sphere with thought provoking lyrics and combination of synth and real instrumentation that has you coming back for a second listen. Her most recent single, “Cry Wolf,” is a testament to that.

“I wrote this song about a particularly painful break up that like most break ups, left me feeling angry and confused,” shared Signe. “Except this time, the anger and confusion wasn’t just between two people, but three. I was struggling with finding a way to express this anger when I stumbled across the old children’s tale Peter and the Wolf.”

“Cry Wolf” is a song inspired by the children’s tale Peter and the Wolf. Like Peter, we often cry wolf over and over in a relationship, asking our partner to fix us instead of doing our own emotional work. In the end however our unresolved baggage is work we must do ourselves, and if we don’t, we too will find ourselves or the relationship being eaten alive by the pain, memories, or unresolved feelings towards past partners. Young Peter while watching his sheep repeatedly “cries wolf” to get out of doing his work. By the end of the story when a real wolf emerges from the woods, the villagers no longer rush to Peter’s aid when they hear him screaming. Instead believing that once again, he is faking it. In the darkest version, he ends up eaten.

In this article:featured, signe