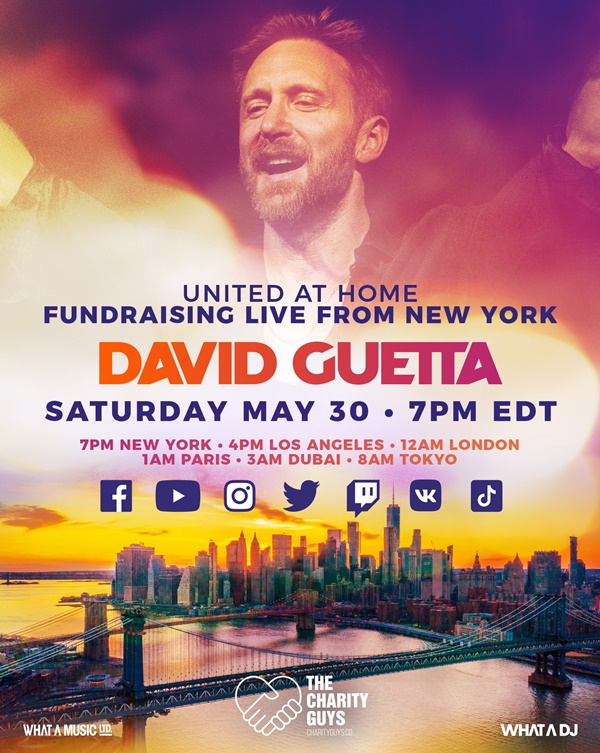 David Guetta United At Home Fundraising Live From New York – After the smashing success of United At Home in Miami, which raised more than $750,000 USD for COVID-19 relief charities and drew more than 25 million viewers, David Guetta will host a live stream performance in New York on May 30th to raise spirits and money for the Mayor’s Fund to Advance New York City, Feeding America, the World Health Organization, and Fondation Hôpitaux de Paris – Hôpitaux de France.

Guetta’s performance will be at New York City’s most iconic location, to be revealed during his set. United At Home, conceived and co-produced by the Charity Guys, aims to put a smile on the faces of New York and the rest of the world through the power of music.

Guetta’s performance will begin after New York’s “daily clap” for frontline and healthcare workers at 7:00 pm (EST), and can be viewed live on social media through the DJ’s Facebook, Instagram, YouTube, Twitter, Twitch, VK and TikTok channels. The stream will feature guest appearances from City First Responders along with other special surprise guests. New Yorkers are encouraged to join Guetta’s global audience and watch this performance safely from home. Moreover, the set can only be enjoyed online; it will not be amplified.

‘I’m excited to announce I will host another live stream to raise money for charity and help battle the virus’, says David Guetta. ‘New York is one of my favorite cities and it’s an honor to be able to do something to help the city during this difficult time. We’re planning something special that can be enjoyed from homes around the world. As a DJ, the crowd is the most important part of any show and even though we can’t be together in a club or at a festival, we can use this time to come together in new ways and help those who need it most’.

“Our city’s healthcare workers are first responders in the fight against coronavirus. As New Yorkers have stepped back and stayed home, our doctors, nurses and hospital staff have stepped forward to work around the clock to save lives,” said First Lady Chirlane McCray. “I thank David Guetta for his partnership to help the city continue to raise funds for PPE and other critical supplies to protect our healthcare heroes during this public health crisis.”

Funds raised by the performance will be donated to the following organizations:


On April 18th, David Guetta lit up the blue-turquoise waters of Biscayne Bay of Downtown Miami, playing for 8000 thousand locals who danced on from their balconies. In front of a 205-feet pool at the Icon Brickell in Downtown Miami, the iconic French artist played a 1.5 hours set packed with feel-good music which has now been viewed more than 25 million times (watch, here) and has raised over $750,000 USD including a $300,000 USD personal contribution from the DJ. The donation channels remain open for Feeding South Florida, Feeding America, World Health Organization and FondationHôpitaux de Paris – Hôpitaux de France and donations are still welcome via davidguetta.com/donate.

The second edition of United At Home will no doubt be another roaring success as Guetta unties the world through music yet again.

Tune in via David Guetta’s socials. Kicking off at 7pm EST