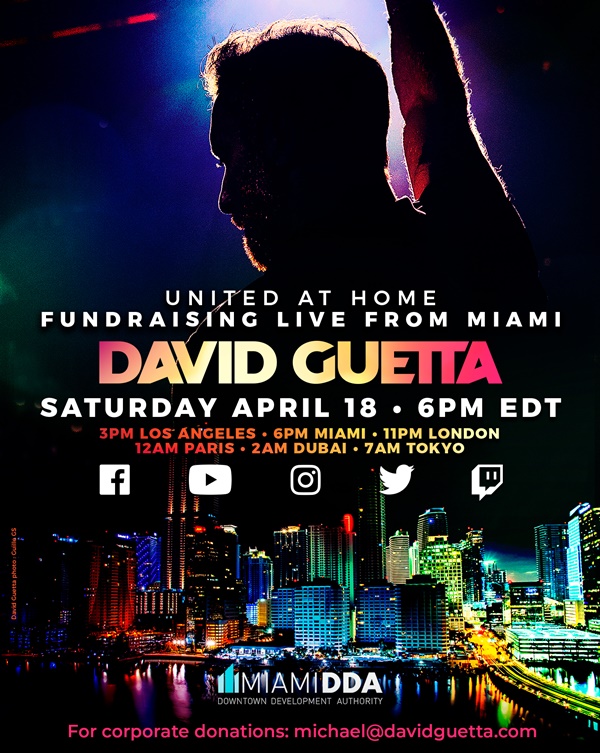 David Guetta COVID-19 Relief – Saturday evening saw millions of people from across the globe participate in a special streamed performance by David Guetta to raise money in relief of COVID-19, in conjunction with Downtown Miami Development Authority. As well as covering the production costs for the show, David Guetta pledged to match every dollar donated during the show, bringing the total money raised to $700,000 USD so far. $613,000 was raised by the end of David’s show however the donations continued to roll in overnight and it’s still possible to donate via davidguetta.com/donate.

David Guetta lit up the blue-turquoise waters of Biscayne Bay yesterday evening, playing for 8000 thousand locals who danced on from their balconies. In front of a 205-feet pool at the Icon Brickell in Downtown Miami, the iconic French artist performed feel-good music from 6pm EDT yesterday evening as more than 12 million people tuned in online from around the world. On Facebook alone, the live performance accumulated 8.5 million views, while 1.2 million people watched on Youtube, 1.1 million via Twitter, 650 thousand on Twitch, 1 million on Huya and many more via Instagram Live.

Speaking on the event, David Guetta says, “I’m still buzzing from what was an incredible night shared with many. Thank you to everyone who joined and to those who were able to donate. Although this is a very unusual time, it was magical to connect with you all through music last night. Most importantly, we’ve raised money that will help those who need it most’.

The funds raised will be distributed to four nonprofits around the world. Through the fundraiser pages set up by David Guetta, $95,000 was raised for the World Health Organization, $90,600 for Feeding America, $125,100 for Feeding South Florida and $85,800 for the Fondation Hôpitaux de Paris-Hôpitaux de France. David Guetta will personally contribute $300,000 to be distributed equally among the four charities. With the money raised, Feeding South Florida can distribute more than 1.7 million meals in the region and Feeding America, the nation’s largest hunger-relief organization can distribute meals nationally. Money raised will also benefit Fondation Hôpitaux de Paris – Hôpitaux de France’s, whose mission is to improve the conditions of healthcare works and patients in hospitals across France; and the World Health Organization’s COVID-19 Solidarity Response Fund, which is ensuring frontline workers are equipped with essential protective wear, patients are receiving proper care, and efforts to develop vaccines, tests, and treatments are accelerated.