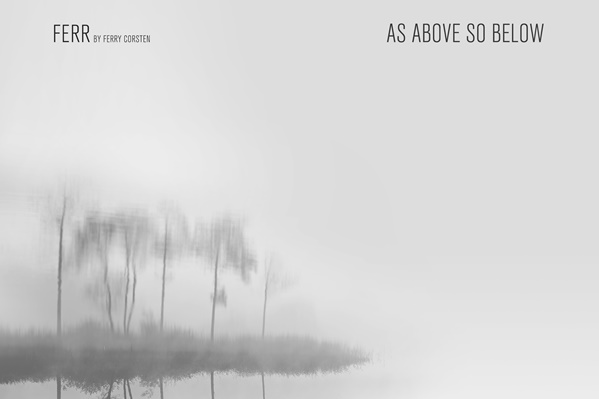 FERR Ferry Corsten As Above So Below – FERR, the alias from electronic music producer Ferry Corsten, is the showcase of a body of intimate compositions by an artist who for over 25 years has perhaps been more associated with the higher BPM ranges of the music world. Encapsulated in a new album titled ‘As Above So Below’, FERR by Ferry Corsten is a new canvas by which he’ll paint melodic experimental arrangements alongside deep and expansive cinematic themes, in what can perhaps be regarded as his most ambitious, avant-garde music to date.

Announced via an open letter to his fans and music fans at large, Ferry explained what led him to craft an album of this type and also what his inspirations were behind its creation. Amidst his hectic touring schedule, the FERR project and this debut studio album ‘As Above So Below’ is a catalogue of work that reflects a deeper side to Ferry, as a producer, a DJ, a husband and a father, it shows the person and how he manages to balance his own life and find his personal stillpoint in the world.

‘As Above So Below’ allows Ferry the space in which to express his creativity in full flow, unbound by limitations and to fully expand on musical ideas without an end goal in mind. Explorations in sample manipulation, field recording, and subtle distortions are abundant throughout the album, as Ferry explores new ways to bring his latest vision to life, utilising reverbs, delays, room noise and tape flutters to build up textures that are coaxed into the field of sound over time.


Speaking further on the album and his change in approach on ‘As Above So Below’, Ferry commented, “I normally produce with a certain structure in mind, which is mostly designed for the dancefloor amongst other things. For this album, however, I went in with a completely blank piece of paper, shut off the autopilot and just went with the flow. No rules, no overthinking. Just let it come naturally. That was one of the biggest changes to how I approached the whole process of making this album.”

As an artist who continues to challenge what it means to be an artist in dance music today, this transparent relationship and sharing his most inward and creative thoughts with his fans, Ferry Corsten has exhibited yet another multi-faceted side to his spectrum of interests and talents, ‘As Above So Below’. Often in a world of chaos we all need our own little piece of calm, and perhaps none more so than in these current times. Through ‘As Above So Below’, Ferry Corsten seeks to express his own interpretation of tranquillity and enables others to find their peaceful moment of reflection that allows the listener to find their equilibrium.

In this article:As Above So Below, edm, edm 2020, edm news, FERR, ferry corsten