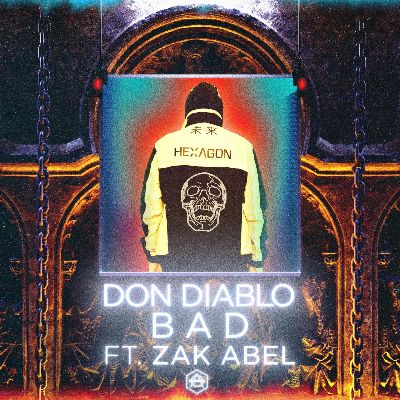 An infectious slice of indie house, ‘Bad’ is stitched together with the soaring vocals of Moroccan-English artist Zak Abel, expertly treading the line between floor-filling club heater and chart-ascending smash.

“Bad is a cheeky track about guilty pleasures, which we can all relate to in one way or another. Musically speaking I really wanted to explore different sounds and push my own sonic boundaries as well as a producer.” Don Diablo explains, “..Bad is co-written with the super talented Elderbrook and features the vocal talent of Zak Abel, both have been high on my collaboration wishlist for years. I literally had the best time recording the vocals in my studio in Amsterdam with Zak and I look forward to performing the song together live for the first time very soon.”

One of the most recognisable figures from the world of dance music, Don Diablo recently clocked in at #6 in the coveted DJ Mag ‘Top 100’ list. Recent highlights from his extensive back catalogue include ‘Survive’, a collaborative single with Emeli Sande and Gucci Mane, heartfelt single ‘Brave’ with GRAMMY-nominated singer-songwriter Jessie J, as well as high profile remixes for Ed Sheeran, Rihanna, Coldplay, Mark Ronson & Miley Cyrus and more recently Anne-Marie.

He is also a regular at all of the biggest clubs and festivals having performed previously at Creamfields, Tomorrowland, EDC Las Vegas, Ushuaia and Hi Ibiza.

An accomplished artist in his own right, Zak Abel is a Moroccan-English singer, songwriter and musician who last year lent his head turning vocals to Duke Dumont’s dancefloor smash ‘The Power’ – a track that has so far amassed 7 million hits on YouTube alone. Prior to this he worked with chart-topping UK duo Gorgon City on the stunning ‘Unmissable’, UKG legend Wookie on ‘Higher’ and late EDM icon Avicii on ‘Ten More Days’.

Continuing to cement his status as a dance music icon, it’s clear that Don Diablo won’t be taking his foot off the gas anytime soon.