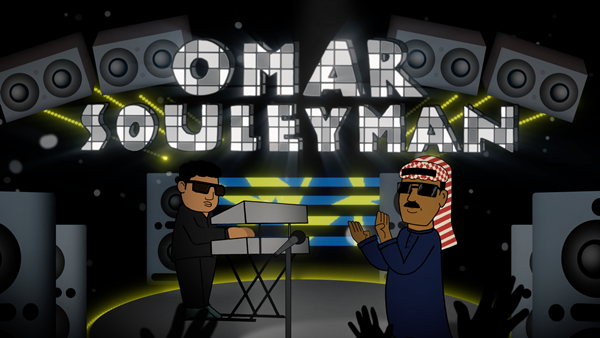 Arabic for “how,” or literally “which color,” the “Shlon” video depicts an animated Omar performing to a crowd of energized fans, clapping along as the speakers bump his fusion of techno, dabke and love poetry while the crowd dances hand in hand.


On his fourth studio album Shlon, released November 22 via Mad Decent / Because Music, Omar Souleyman presents 6 new techno-meets-dabke songs about romance and love — specifically singing about an intriguing woman he watches from afar whose kiss would be worth 10 million other kisses on title track “Shlon” — all superimposed on complex techno arrangements by Hasan Alo, and based on the hi-speed Kurdish and Arabic dabke and baladi styles.

Shlon features double keyboard work from Hasan Alo, a fellow native of the Hasaka region in Northeastern Syria who has recently been active in the vibrant nightlife scene of Dubai. Azad Salih, a young Syrian man currently living in Mardin, Turkey, accompanies on saz, with love poetry written on the spot during the album’s recording session by longtime Omar collaborator Moussa Al Mardood – also currently based in Turkey.

“his most cohesive album to date” – THE QUIETUS

“returns to the incendiary approach of his early albums, worrying not so much about hip textures and beats as delivering these songs as soulfully and energetically as possible” ALLMUSIC (4/5 stars)

“For a guy who’s released over 500 albums over the course of his life, Omar Souleyman still has a surprising amount of gas left in the tank.” – THE LINE OF BEST FIT