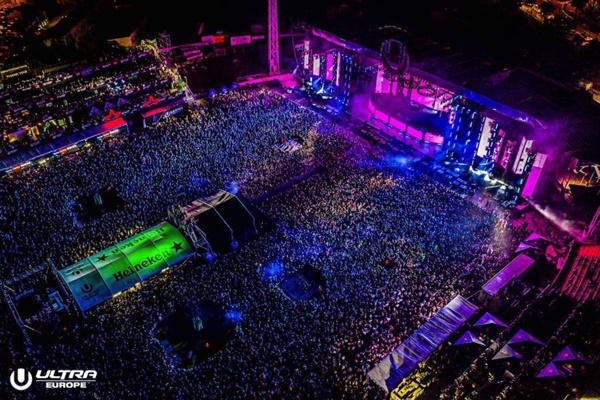 ULTRA Europe 2020 – Following this summer’s record-breaking ULTRA Europe festival with a total attendance of more than 120,000 fans from 143 different countries over the course of three days, Europe’s premiere destination music festival will return to Split, Croatia from July 10 – 12, 2020 for its eighth annual addition with a star-studded Phase 1 lineup.

ULTRA Europe fixture Armin van Buuren will continue the beloved tradition of headlining the festival with an explosive Main Stage set complete with show-stopping fireworks. Masked, multi-platinum selling superstar Marshmello will return to ULTRA Europe following his celebrated 2018 performance when he opened his set with a Croatian football anthem, while Grammy-nominated international heavyweight DJ Snake will once again showcase the stadium-smashing records that have earned him more than a billion combined views on YouTube.
Grammy-nominated crossover juggernaut Steve Aoki will ignite the stage with his famed, larger-than-life cake-throwing theatrics and undulating basslines, and similarly, French party-starting phenomenon David Guetta promises an energetic, dance-pop performance anchored by his countless hit singles that have sold more than 30 million copies worldwide. Multi-platinum record selling Dutch legend and ULTRA Worldwide mainstay Afrojack
will rattle the dance floor with his high-octane, hands-in-the-air set, while Swedish electro-pop duo Galantis will serenade their audience with their impressive catalogue of sultry, vocal-driven anthems. Legendary drum & bass trio Pendulum Trinity will make their ULTRA Europe debut, after having reunited earlier this year outside of their native Australia for the first time in a decade. British-Canadian techno authority and three-time DJ Awards winner Richie Hawtin will round out the Phase 1 lineup with his world-renowned underground sounds.