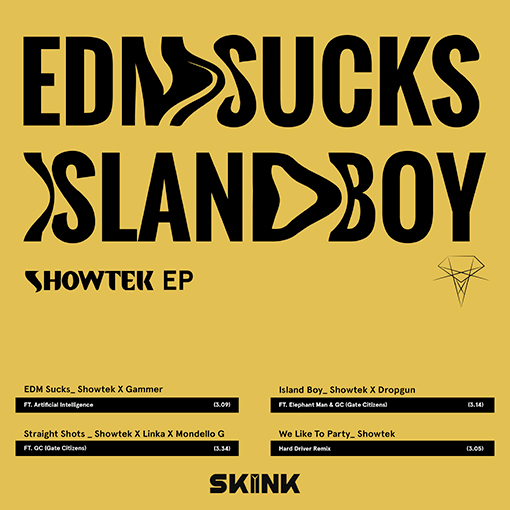 The second single is taken from Showtek’s hotly anticipated ‘EDM Sucks/Island Boy’ EP. ‘Island Boy’ is an exotic collaboration with Russian duo Dropgun that deploys steel drums, anthemic horns and the Patois vocals of dancehall artists Elephant Man and GC (Gate Citizens). It follows on from the release of bass-heavy ‘EDM Sucks’, a high-octane collaboration with UK hardcore legend Gammer.

One of the biggest acts in dance music, Showtek have dominated the international music industry with their melody-powered hooks, beat-heavy songs, memorable anthems and high-energy performances. Cementing their reputation as one of dance music’s most prominent double acts, they boast an impressive collection of accolades, including Best European DJ and Producer, Best Track, Best Artist Album, Beatport Music Award for Best Selling Track, and six Beatport #1s.

Garnering global support on hit releases ‘Your Love’, ‘Sun Goes Down’ and ‘Believer’, which racked up over  200 million streams on Spotify collectively, Showtek have further established themselves as one of dance music’s most successful production duos, with their collaboration list including names like Moby, Major Lazer, Tiesto and Hardwell. They also linked up with David Guetta in 2014 on hit single ‘BAD’, which went 10x Platinum, amassed over 800 million views on YouTube and generated 375 million Spotify streams.

Best known for ‘Pyramids’, Dropgun’s 2014 collaboration with DVBBS that has generated 17 million hits on YouTube alone, has carved a reputation as one of the most talented production duos in EDM. Earlier this year they remixed trance master Armin Van Buuren and recently performed at a Dharma Worldwide showcase at ADE.

A legend of the dancehall world, Elephant Man has previously collaborated with some of the biggest names in music, including Rihanna, Fatman Scoop and Busta Rhymes. ‘Island Boy’ marks his first foray into EDM – a scene crossover that has delivered scintillating results.

GC (Gate Citizens) is a Jamaica-born, New York-based songwriter and producer whose sound has found a home on Skink over the past few years. He previously featured on Showtek’s raucous 2017 hit ‘Moshpit’ and earlier this year linked up with fellow Skink artists Linka & Modello on euphoric single ‘Butt’.