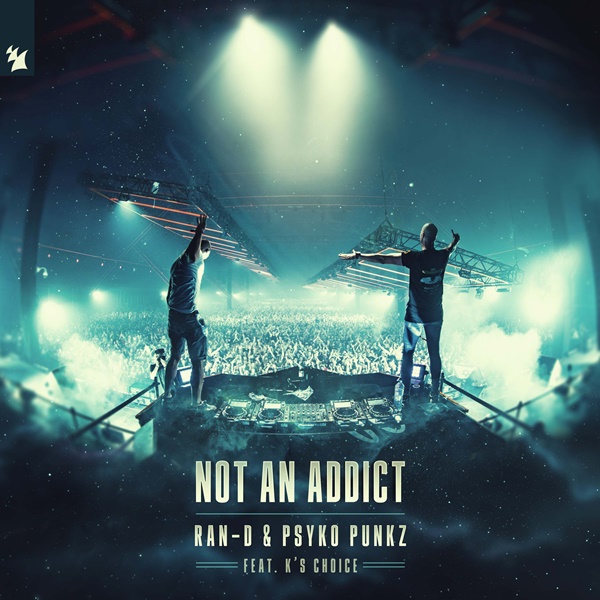 Ran-D Psyko Punkz Not An Addict Featuring K’s Choice –  Almost twenty-five years after the initial success of K’s Choice ‘Not An Addict’ (#5 on Billboard’s Alternative Songs chart), Dutch hardstyle tastemakers Ran-D and Psyko Punkz have joined forces to turn the 1995 smash hit into a full-fledged hardstyle anthem. With screaming synths, crunchy kick drums and killer vocals re-recorded by K’s Choice singer Sam Bettens, the revamped ‘Not An Addict’ is bound to take center stage in ways similar to how it wrecked the stage at Defqon.1 earlier this year.

Ran-D & Psyko Punkz: “Doing a track together with K’s Choice is a really big honor for us. We’re really happy with the result, and it shows that we are all addicts to the music in the end.”

K’s Choice: “We owe a lot to our most well-known song, but it shouldn’t come as a surprise to anyone that ‘Not An Addict’ has nothing new in store for us. So we are extremely proud and happy to see that our song still manages to inspire new generations, with this contemporary version of Ran-D and Psyko Punkz as a sterling example.”

For Ran-D, one of the world’s leading Hardstyle artists, ‘Not An Addict’ follows on the success of his track ‘Zombie’. The record, which was first played at Qlimax 2016 and officially released about a year later, sold certified gold in the Netherlands and performed exceedingly well in various national Spotify charts (including a #1 in Chili), racking up almost 40 million streams on the popular streaming service.

In turn, Psyko Punkz has been a trailblazer in the hardstyle scene since he embarked on the scene in 2008. Psyko Punkz locked in sought-after slots at leading festivals such as Qlimax, Defqon.1, Decibel, Reverze, Tomorrowland and Mysteryland, and even ranked in DJ Mag’s Top 100 DJs poll twice.

K’s Choice was founded in 1992 in Antwerp by siblings Sarah (now Sam) and Gert Bettens, and is still considered one of the most successful Belgian bands. Over the years, they charted in the Top 10 with numerous albums, including ‘Paradise In Me’, ‘Cocoon Crash’, ‘Echo Mountain’ and ‘The Phantom Cowboy’ (the latter of which went straight to #1 in Belgium) and racked up multiple gold and platinum awards. Their big break came in 1995 when they released ‘Not An Addict’, a single that cemeneted their name in the international music scene. Even now, 25 years later, it’s still getting tons of airplay across the music realm.