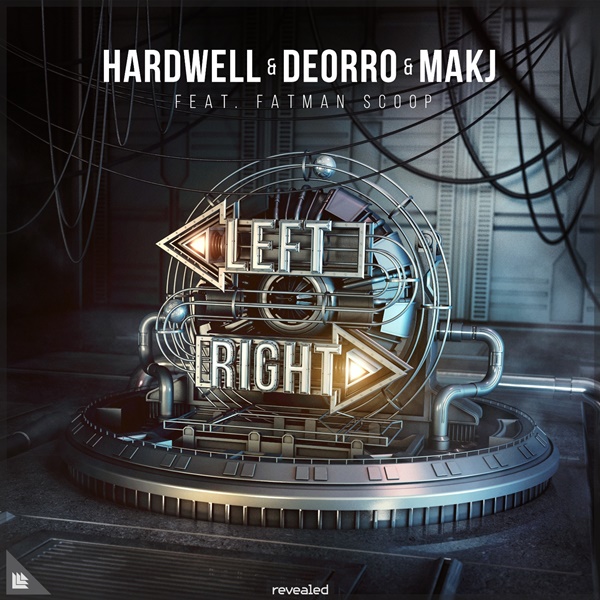 Hardwell, Deorro, MAKJ Left, Right Feauturing Fatman Scoop – It’s been both a Summer of colossal future hits and long-awaited, old-skool style IDs from the Dutch maverick that is Hardwell – including anthem of the season ‘Summer Air’ – and now, following the release of ‘Retrograde’, he’s back with yet another epic release on his own Revealed Recordings imprint, playing production pied piper to a handful of collaborators with the crowd-busting ‘Left Right’.

Bouncing back with Deorro and MAKJ since their respective releases on the imprint ‘Rambo’ and ‘Beast’ both standing as huge as their titles imply. The legendary, multi-million streamed Fatman Scoop also boomerangs back to Revealed to inject some hypeman mania into ‘Left Right’, creating the musical equivalent of pure dynamite.

Deorro’s an artist who needs no introduction. Famed for the 2015 megahit ‘Five More Hours’ featuring Chris Brown, which was clocked up close to half a billion Spotify streams, Deorro’s profile hit global status and so too has his impressive stream of releases that includes the likes of ‘Bailar’ and ‘Perdoname’. Deorro and MAKJ are no strangers to studio time together, having collaborated on multiple tracks with their last one being the popular ‘Retumba’. MAKJ has also previously paired up with Hardwell on the club banger ‘Countdown’. So, take those two electronic stars, mix in the Dutch titan that is Hardwell and blend it with the Grammy Award winning rapper and undisputed voice of the club Fatman Scoop, and the outcome is pure fireworks!

With the unity of these four huge artists coming together for this masterpiece of thrilling EDM, different styles collide for a release that is as frenzied as it is meteoric as injections of synths permeate like an electric current through Fatman Scoop’s countdown commands, for hypnotising melody stabs follow. It’s a true face melter of the highest order, with a slick of finessed bass to bring another deeper, grooving dimension around the halfway mark; it’s a cherry-picked amalgamation that marries the worlds of EDM, big-room, high-intensity MC’ing and more.