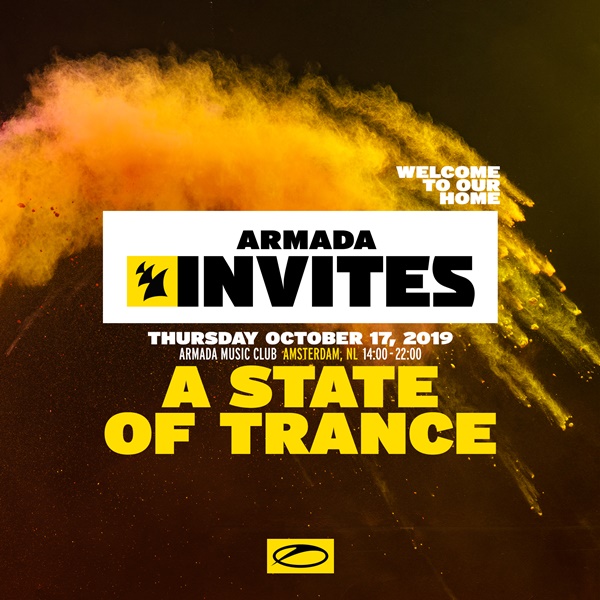 Armada Invites ADE 2019 – After touching down on Amsterdam Dance Event with a three-day marathon spectacle of its livestream concept in 2016, 2017 and 2018, Armada Music is back to spice up this year’s edition of the world’s biggest dance music conference as well. From Thursday, October 17 till Saturday, October 19, the Amsterdam-based record label is hosting three exclusive ‘Armada Invites’ events with equally phenomenal line-ups, geared toward respectively Trance (Thursday), House/Melodic Techno (Friday) and all-round dance music (Saturday).

On Thursday, October 18, Armin van Buuren will kick-start the ‘Armada Invites: ADE’ marathon with a special broadcast of his world-famous radio show, A State Of Trance. From 14.00 till 22.00 (CEST), a legion of Trance’s finest artists will invade both the radio studio and Armada Music’s own in-office club for a host of high-energy live sets.

A mere day later, on Friday, October 19, a host of House/Melodic Techno tastemakers – including household names such as Joe Smooth, Mambo Brothers, Maxim Lany, Mistajam and Phil Fuldner – will turn the Armada Music HQ into groove paradise. From 17.00 to 23.30 (CEST), they’ll be handing out dashing rhythms left and right for some peak-time floor thrilling.

And last but not least, the third day of this year’s ‘Armada Invites: ADE’ marathon offers up the best of dance music from 17.00 to 22.00 (CEST). The star-studded line-up includes hotshots such as ARTY, Bob Sinclar, Dave Winnel, Sultan + Shepard, Zonderling and more.

Want to be there during one of these exclusive events? Head on over to this page on the Armada Music website, press on the RSVP link(s) listed there and fill in your details and extra info for a chance to attend. Additionally, all live sets will be livestreamed on a custom-made landing page (ade.armadamusic.com) and on Armada Music’s Facebook page.