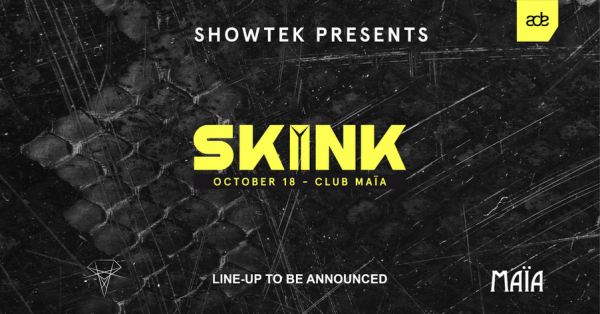 The innovative duo will be joined by fellow Dutch artist Sidney Samson, best known for 2009 smash ‘Riverside’ and Bassjackers, a duo that have over 2.1 million monthly Spotify listeners and YouTube videos with 10-90 million views. French DJ Steve Walls, fresh from dropping pounding trap record ‘Bushi’, and Belgian artist Linka are also on the billing, with more to be announced.

The announcement coincides with the re-launch of Skink Radio, a weekly podcast dedicated to showcasing the array of talent signed to the label. The hour-long session will be hosted by Showtek and often feature a guest mix from other Skink artists.

Releasing boundary pushing music since 2013, Skink kicked things off with Showtek’s dancefloor hit ‘We Like To Party’, a single that has amassed 101 million YouTube hits to date, before releasing further tracks from a slew of revered artists, including David Guetta, Moby, Major Lazer, Quintino (Tiesto) and MAKJ. More recently the label has released music from Steve Walls and Linka & Mondello’G amongst others, as it continues to provide a platform for exciting up-and-coming talent to showcase their sounds.

A five-day conference and festival held every October, ADE features 450 events and 2200 artists in 115 clubs and venues – attracting over 350,000 dance music lovers from all over the world to the Dutch capital.

Mainstage regulars, Showtek’s talents have taken them across the globe where they have gone onto perform a number of sizzling sets at iconic festivals including Ultra Music, Tomorrowland, Coachella, Beyond Wonderland, EDC, Creamfields, Electric Zoo and Lollapalooza to name a few.

This year the brothers are currently in the midst of a global ten-date tour which included sets at the iconic fairyland theme park Disneyland Paris for Electroland and Dreamland Festival in the Netherlands. Bringing their trademark sound to all corners of the globe, Showtek continue to tour across the world at a variety of festivals and parties including Music Circus, S20 Songkran Music Festival, Parookaville, Mysteryland, XXXPERIENCE, Don’t Let Daddy Know and more.

With some of the most exciting names from the electronic music world in tow, the Skink Records ADE showcase promises to be one of the standout parties from the internationally renowned five-day Event. Buy tickets here.