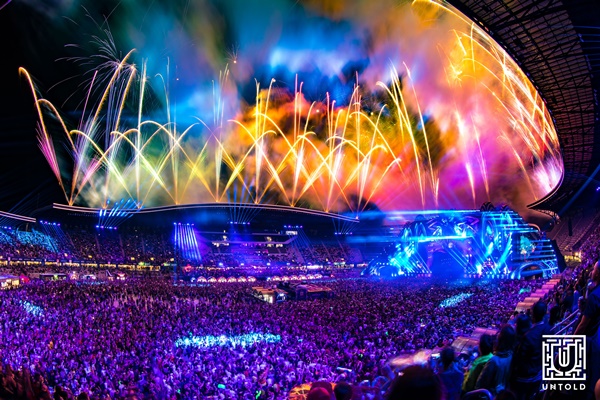 UNTOLD Festival 5 Year Anniversary Edition – This year’s UNTOLD festival (Cluj-Napoca, Romania, 1-4 August) once again cemented its reputation as one of the most incredible events in the music world, achieving record-breaking numbers and setting a new standard for production and performance.

More than 372,000 people enjoyed 74 hours of music across the weekend, with over 6 million people watching the live streams online. Day 4 being the absolute highlight with over 97,000 music-lovers attending the festival. The United Kingdom, The Netherlands, Italy, France and Germany were the foreign countries with the most fans in attendance, making up 20% of the crowd amongst other foreign countries. Alongside 20% fans from Cluj-Napoca, there were 60% local music lovers from other parts of Romania. This breathtaking 8-stage festival hosted huge artists such as Robbie Williams, David Guetta, Martin Garrix, Solomun, Tale of Us, Black Coffee and many more.

UNTOLD has a special place in the hearts of many artists so it seems; Armin van Buuren was heard exclaiming “it’s good to be home Romania!” in his set, while Martin Garrix shared the sentiment (“I missed you so fucking much Romania!”) as did Steve Aoki (“I love you so much Romania!”). Garrix enjoyed himself so much that he stayed after his set to check out some of the acts on the Galaxy Stage, while Robbie Williams was seen visiting David Guetta’s main stage set and DUB FX on the Alchemy Stage after his own incredible performance earlier that night.

UNTOLD’s 5 year anniversary also marked Tujamo’s 5th performance at the festival, he stated: “I tell you with great honor that UNTOLD makes me feel like I’m part of their family and for me it’s the most important festival of the year.”

But, UNTOLD is not only about the music. The festival’s BLOOD NETWORK donation campaign saw enough blood donated to help some 5000 people and also the organisers involvement with the Children’s Hospital of Cluj-Napoca yielded many great results. Fans could donate their unused credit on their festival wristbands for the benefit of the hospital, and the festival organisers have paid for much-needed improvements, new air-con units and the first two sterile rooms in Transylvania. Besides this, like every year, UNTOLD will also cover the costs to preserve the park and the rest of the festival-grounds to keep the environment and the center of the city in the best conditions.

Registration for UNTOLD 2020 is now open with a special low-price ticket available for those who get in early. Time to start planning your outfits… – sign up here to be the first to hear about artist announcements and early bird tickets.