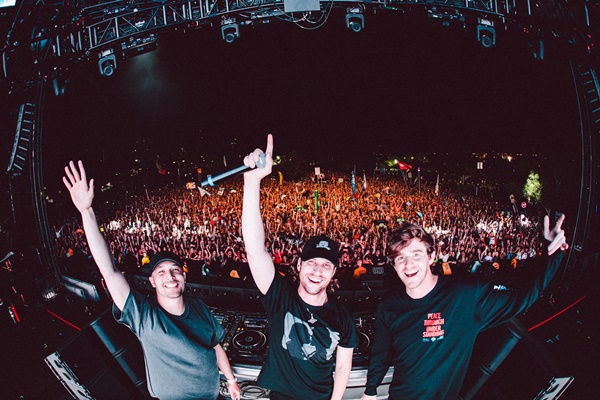 SLANDER The Alchemy Tour – Beyond building a mint name for themselves through jaw-dropping original productions and massive collaborations, SLANDER are one of the top live draws in North America right now.   On Saturday, August 17 the duo of Derek Andersen and Scott Land along with NGHTMRE launched “The Alchemy Tour” with a headlining slot to an unprecedented crowd of over 22,000 fans in Long Beach, CA.  Taking place on the waterfront Marina Green as a first-time music event, “The Alchemy Tour” launch, which also features Seven Lions and The Glitch Mob, smashed records as the largest attended single stage bass music event in the history of electronic music in America.

LA-based SLANDER recently turned their popular Gud Vibrations brand into an official record label with good friend NGHTMRE, ensuring their legions of fans that their famous GUD VIBES are only getting started. Based on their Mad Decent released single “Gud Vibrations,” best friends NGHTMRE and SLANDER decided to build their brand together, supporting good music, good friendships, and good vibes. Their GV brand has seen exponential growth with a world-wide audience. Back to back sellout nights headlining the Hollywood Palladium was quickly followed by selling the NOS event center with 10,000 fans while at the same time taking the dance music scene by storm with the first appearance of their new mind-blowing stage production “The Atom.”  In 2017 and 2018 they took “The Atom” to sold out shows at Red Rocks, as well as curating their own stage with it at Nocturnal Wonderland.  This fall, the trio will perform with “The Atom” at all “Alchemy Tour” dates.

A massive undertaking produced by Live Nation, “The Alchemy Tour” is a stacked show coming to arenas, amphitheaters, and more for a once-in-a-generation alliance of four artistic powerhouses.  The next date is September 4 in Charlotte, NC with the tour making stops in Pittsburgh, Austin, The Gorge in Seattle, San Francisco and more before wrapping October 13 in Phoenix, AZ. Tickets are on sale now at LiveNation.com.

Before picking back up on The Alchemy Tour in Charlotte, next look for SLANDER and NGHTMRE to present the Gud Vibrations stage at New York’s largest and longest running electronic music festival Electric Zoo.  The stage will highlight performances from both acts along with other artists especially curated by them including GTA, Boogie T & Squanto, WAVEDASH, Shadient and more.