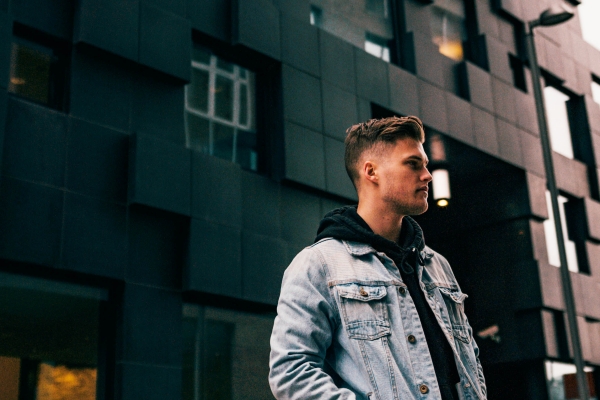 For over four years, Norway based DJ and producer Milos has been in the EDM soundscapes honing his skills and touching base with genres like house, pop, tropical house and even deep house with his popular remixes. With his take on Maroon 5‘s ‘She Will Be Loved‘ hitting over 175 thousand streams on SoundCloud in 2015, Milos was destined to continue rising.

What was it like releasing remixes for some of the music industry’s most exciting artists and gaining steady notoriety from them?

It was really fun taking old classics and turning them into something more electronic and tropical which was huge back then. Getting such recognition on them also meant a lot, as I was just starting up and didn’t know too much about production.

Jump several years later and Milos finally unveiled his original production ‘Trade You‘ in April, featuring LA based singer and songwriter Loé. In this song he experimented with future pop vibes with organic elements like trumpet, strings, guitar and piano.

Off the cusp of ‘Trade You,’ what has inspired you so far in the studio when it comes to producing and developing your ongoing and evolving signature sound?

Some people find their signature sound in a year, some spend 10 years, I guess my inspiration has been from producers like Avicii, R3HAB, Matoma and many others. I have always been a huge fan of combining real life instruments with synths and more electronic samples. Seeing the idols develop their style and techniques have inspired me to experiment a lot, trying to get a bigger variety of sounds, which I then started to narrow down looking for my signature sound.

Continuing to release powerful productions with every release, now you’ve unveiled your brand-new track ‘Expectations‘ alongside Ramón onto recent home label Pack The Pool. Standing alone somewhat from his previous releases, this song bridges the gap between future house and an acoustic sound all the while presenting relatable, deep and vulnerable lyrics through the vocal talent of Ramón.

Lyrics written by Patrick Brizard and performed by Milos and Ramón, ‘Expectations‘ offers a message about what it’s like living up to everyone’s expectations and doing what is what is within one’s own limits and within their grasp to get the most out of situations.

During the summer of 2018, you had the chance to remix Ramón’s single ‘Knock.’ What was it collaborating with the singer, songwriter and vocalist now versus putting your own spin on one of his own songs?

It is so much fun getting to be a part of everything from making a song idea on my computer to being in a session writing, and then end up being in a recording session with Ramón seeing the song evolve into a finished product. A year ago, I would’ve never thought I’d have a single featuring the artist I sat down remixing and I guess this just shows how hard work pays off.

You’ve mentioned how this is one of the first times you were in the studio with a singer, songwriter and vocalist. What was the creative process like for you guys, as you blended your own styles and met each other on the same wavelength towards the end of production?

At first when you meet new people to write with, I think it’s important to get to know each other a bit. We then started talking about all kinds of things, and somehow ended up talking about expectations in a relationship – which then brought us to the idea behind the song. We wrote on top of a production-idea I had brought, but with a completely different “drop.” After the session I went home and changed up the drop completely because I felt that the lyrics and vocal deserved a different approach production-wise.

Taking a step back, it’s important for almost all individuals in the EDM community and even the music industry to take a moment, reflect on their roots and see where it all started. Under another alias, Milos started his journey under moniker Hargulf. Hailing from Stord on the west coast of Norway, he was making waves across the soundscapes with every tropical house remix.

Milos, what was the beginning of your journey like? What was your earlier inspirations for you remix style and what was it like going from a mysterious artist, to Hargulf and ultimately to the exciting alias Milos?

My production journey started with a school project where we had to make something creative in music class. I had always been a fan of electronic music and thought; why not give this FL Studio program a shot? I then later started doing remixes, and as I come from Norway it was hard to not get inspired by Matoma and Kygo which was huge on SoundCloud back then. After around a year doing remixes, I had a long break from posting my music online, as I felt like I wanted to evolve as a produced and try to find my own style. As I started to develop a sound I felt as it was time for a fresh start, new alias- new sound.

In total, Milos has hit over a million plays on SoundCloud, 400 to 500 thousand views on YouTube and over 250,000 streams on Spotify for his official remix for Ruben‘s ‘Go For Love.’ Most of this success had been throughout his earlier career alone and now with original content, Milos can only continue to rise!

Of course, numbers aren’t everything, but they are certainly a testament to Milos‘ skills and production ability, whether he is remixing records or offering his fresh original productions. It has been said that at least a couple more original tracks are coming later this year, which is without a doubt exciting!

What can your fans and new listeners of Milos a-like expect as we continue through 2019 in terms of future productions, shows and remixes amongst the exciting fact that you have been sporting releases through label Pack The Pool?

All I can say is that I will be pumping out tracks continuously, mostly originals but remixes as well. When it comes to shows I don’t have much planned, but I will definitely be doing them in the future if I get the opportunity.

Milos, what has been your favorite experience so far in the past four to five years as a DJ, producer and rising artist?

It’s a tough one but it has to either be getting to both warm up and be the DJ for Nico & Vinz in front of several thousand people, or just the fact that I now am fortunate enough to get to meet brand new people in the studio, writing lots of new music.

Finally, do you have any goals or ‘Expectations‘ you’d like to exceed and meet within your limitations, as we get into the roaring 20’s for a second time?

I see what you did there! I mainly want to release music consistently, and hopefully I get to start doing shows within the next couple of years.

I want to thank you for taking the time to speak with me on behalf of EDM Joy. I’m without a doubt sure that fans across the EDM soundscapes are going to enjoy your latest single ‘Expectations’ off the hinges of your first original production ‘Trade You.’

Make sure to follow Milos to keep up with the rising artist as he continues his exciting journey, discovering and evolving his signature sound along the way with every original release and potential remix he has in store as we push through 2019!