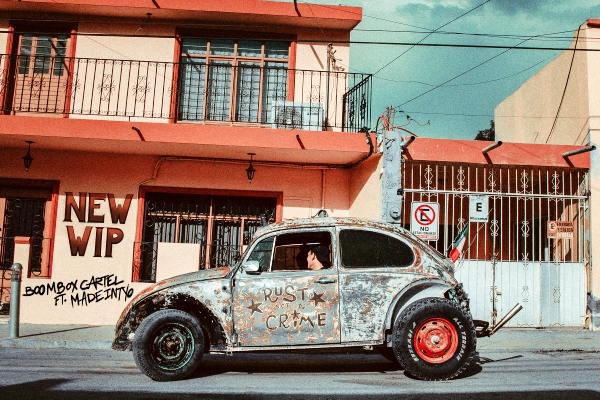 Boombox Cartel & MadeinTYO – ‘NEW WIP‘ – Seeking to resume his reign over the festival season airwaves for another consecutive year, Boombox Cartel has officially released his latest bass-defying production. The Mexican DJ and producer has joined forces with one of hip-hop’s most renowned talents, MadeinTYO for ‘NEW WIP.’ Boombox Cartel is no stranger to the Mad Decent imprint, as ‘NEW WIP‘ finds a landing spot on the iconic Diplo-led label, and is now available across all streaming platforms.

Rapidly igniting with hard-hitting drums and a menacing horn-flooded instrumental, MadeinTYO provides an undeniably smooth set of vocals on ‘NEW WIP.’ Boombox Cartel builds the track with an effervescent trap-induced drop, combining electrifying synths and a distinct hip-hop flair. ‘NEW WIP‘ proves to be a pristine and flawless collision between the dance music and rap worlds, as Boombox Cartel and MadeinTYO prepare to expand their horizons into uncharted territories.

‘NEW WIP‘ marks Boombox Cartel‘s first official appearance on Diplo‘s Mad Decent imprint since his Flosstradamus-assisted single, ‘ID‘ in late 2018. Boombox Cartel set out on the road this past February for his very own The Cell headlining tour and has since made appearances at massive U.S. festivals including Beyond Wonderland and Ubbi Dubbi. On the production side, Boombox has consistently delivered meticulously crafted productions to his dedicated fanbase, with his Karra collaboration ‘Nothing To Hide‘ officially seeing its release in March 2019.

Most recently, fans were gifted a surprise release with Tory Lanez and Bad Bunny for ‘4U.’ The Mexican producer is only getting started as the summer season begins to heat up, with a vast array of singles slated for the months ahead.