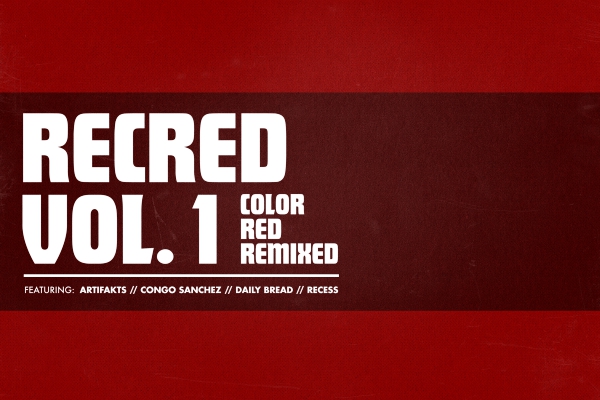 “The main thing I love about remixers is their approach. Generally, remixes are dancefloor focused, and the creators are the very people who present them to the club audience. This gives them a whole different perspective than the musicians/writers on the original recording. In my experience, remixers don’t tend to be traditionally trained musicians, and therefore don’t fall into the traps of conventional composition rules. Instead, using their ears and instincts to create tension and release in their music, which in turn can create more original sounds. I also love the rhythmic focus of remixes, again with their attention to the dancefloor – it’s all about the groove!,” Color Red Founder, Eddie Roberts, remarks on the nature of remixes.

In addition to the RECRED album, Color Red have also released three brand new remixes over the last few weeks such as TNERTLE‘s take on Analog Son‘s ‘CTI‘ here.

The RECRED: Volume 1 vinyl record will also be available for purchase in record stores worldwide on March 15th on the global dealer, Fat Beats. Record store retailers can view the Color Red collection via Fat Beats and order here.

Color Red will continue to release collaboration tracks partnering with producers worldwide that span a multitude of genres across the vast world of electronic music. Starting in February, Color Red began delving into three different “series” models where the platform release 1 track per month by three different groups that include Reed Mathis‘ ‘Electric Beethoven,’ ‘Death by Dub‘ featuring members of John Brown‘s Body, The Motet and more, and ‘J.E.D.I,’ “jazz electronic dance improvised” led by Aaron Johnston of the Brazilian Girls.