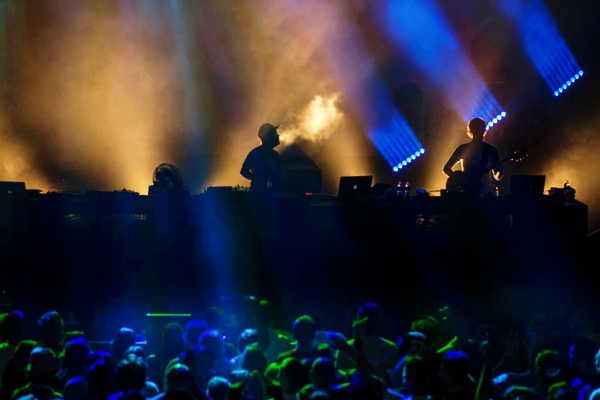 Gramatik – ‘Puff Your Cares Away‘ – Closing out 2018, Slovenian born producer and DJ Gramatik, capped the year off with the release of Street Bangerz Vol.5. A truly landmark release, SB5 celebrates the 10 year anniversary of his seminal Street Bangerz mixtape that put him on the map. Now having paid homage to his past, Gramatik is moving full speed ahead into the future and is now looking to celebrate another milestone soon coming on the horizon in his New York State home, the legalization of marijuana.

Leaving no question on his affinity for the historically controversial herb, Gramatik has composed a brand new single titled ‘Puff Your Cares‘ away to usher in a brand new era in the fight for decriminalization. As in classic Gramatik fashion, ‘Puff Your Cares Away‘ is a conglomerate of glitch-hop, electronic and organic instrumentation, seamlessly spliced together in a three-minute single. To accompany the release is a lyric video illustrated with smoke rings and trippy visuals to really hit home Gramatik‘s lifted message.

Up next for Gramatik, he’ll be gearing up for the release of Re:Coil Pt. II, the follow up installment of Re:Coil Pt.1, a release exploring science/technology related themes that featured Branx, Anomalie, Balkan Bump & Talib Kweli, Galactic Marvl and Eric Krasno. Gramatik isn’t quite finished there, as 2019 will also see the release of his highly anticipated full-length album, the first since his 2016’s pivotal LP Epigram.

As far as Gramatik‘s upcoming live dates, 2019 will see him performing a limited run of festival stops including Electric Forest and a headlining performance at Sonic Bloom. In addition, he will be celebrating 10 Years Of Street Bangerz at Music Hall Of Williamsburg on March 16th as he takes over the venue for a special commemorative performance.