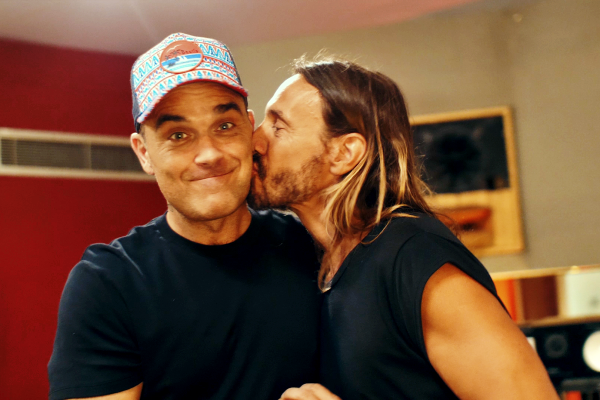 Bob Sinclar & Robbie Williams – ‘Electrico Romantico‘ – Sometimes, a chance meeting is all it takes for magic to happen. In Los Angeles, at the start of a new school year, Bob Sinclar was invited to a charity event organized by the French high school his children go to. Among the parents participating was a certain Robbie Williams and during this atypical meeting far from studios, clubs and gigantic concert halls, all the elements were there for an artistic collaboration between an electronic music star and world-renowned pop icon ‘Electrico Romantico.’

Confirming the musical shift of Bob Sinclar after dominating European radio airplay for almost fifteen weeks with summer single ‘I Believe,’ ‘Electrico Romantico‘ offers a combination of explosive grooves and disco-esque vibes to really get the crowd going. Add to that Robbie Williams‘ alluring, impeccably poppy vocals and you know that this meeting of two staple artists shows why both artists are unanimously touted as 21st century hit machines.

Legendary French artist Bob Sinclar has been one of the longest standing figures of the international electronic music scene, and produced some of its most iconic house hits across a career spanning almost 20 years. With eight full-length albums under his belt, a glittering discography that includes #1 hits and gold and platinum records, and a constant tour diary that features annual slots at Carnaval de Rio and Tomorrowland as well as an annual residency at Pacha Ibiza with his “Paris By Night” concept, his influence can be felt throughout all levels of dance music.

There’s no denying that Robbie Williams is among the biggest music stars of this era. As a solo artist, he has sold over 77 million albums worldwide, has six of the top 100 best-selling albums in British history, and has had fourteen #1 singles. He is also one of the most in-demand live performers in music, who continues to play stadiums around the world and has won a record number of eighteen BRIT Awards, more than any other artist in music history.