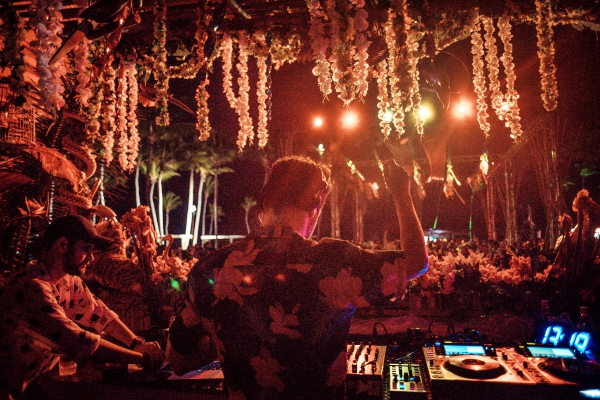 Electric Paradise 2019 – Welcoming a selection the biggest names in electronic, urban and hip hop to the Dominican Republic, Electric Paradise illuminated the beautiful beaches of Cap Cana on Saturday, December 22nd to a sold out crowd.

Currently in its fourth year, festival founder Pablo Pou of PAV Events says “Dominican people love music and we have diverse tastes. My goal with the festival was to create an environment where everyone could listen to the music they love,” regarding Electric Paradise.

Kicking off at 4PM with local talent Riccie Oriach and Omar Andino, the festival doors opened ahead of sunset on the golden sands on Juanillo Beach. Official partner of Electric Paradise, local Dominican beer Presidente served up ice cold beers to keep attendees refreshed in the tropical temperatures.

As the sun set the crowds continued to pour in to enjoy likes of The Knocks, Jack Novak and Squire across the Live, Dance and Rumors stages. Local chefs served up Dominican specialities and delights from a wide range of food trucks. While roaming around from stage to stage, attendees enjoyed checking out illuminated swings, a ferris wheel, and interactive art all built custom for Electric Paradise.

The energy on the beach kicked in high gear with Vini Vici and an epic set from Major Lazer, meanwhile Foster The People took to the live stage for an electrifying live performance. Crowds poured into to the live stage anxiously awaiting a performance by Cardi B, who has joined by Ozuna onstage and ended with a performance of ‘Bodak Yellow.’ Cardi proclaimed her love of the Dominican Republic and pride for her Dominican roots.

J Balvin took the live stage next with an elaborate setup including giant inflatable dinosaur and playing a number of hits including ‘Mi Gente,’ ‘Ay Vamos‘ and ‘X.’ Just a short walk away, the dance stage offered up a wide variety of mind bending visuals a during sets by Indian-inspired DJ and producer KSHMR. UK garage duo Disclosure hit the stage next followed by Hexagon label boss Don Diablo who’s performance provided non-stop energy.

Leading things into early morning hours, the ladies of Krewella jumped up on stage with no signs slowing down spinning back to back dance favorites. On the live stage, one of the world’s top hip hop artists Wiz Khalifa closed things out with songs from his beloved album Rolling Papers 2 including fan favorite ‘Black and Yellow.’

Not to be forgotten is the beautifully bazaar-like decorated Rumors stage welcoming Blond:Ish, Bedouin and of course head of the branded series, Israeli DJ Guy Gerber. With no pause in between each DJ, the crowd was captivated all night and dancing until sunrise. Seth Troxler and Lauren Lane finished out the festival by going back to back unexpectedly until well past 6AM, despite the festival officially closing at 4AM.

This year’s edition of Electric Paradise will go down in history, bringing a fresh new experiences to the island, involving gastronomy, art, technology and innovation, where thousands of people joined in to live a night where their dreams became reality.

We’ll see you at Electric Paradise in 2019, where ‘The dream is Real.’