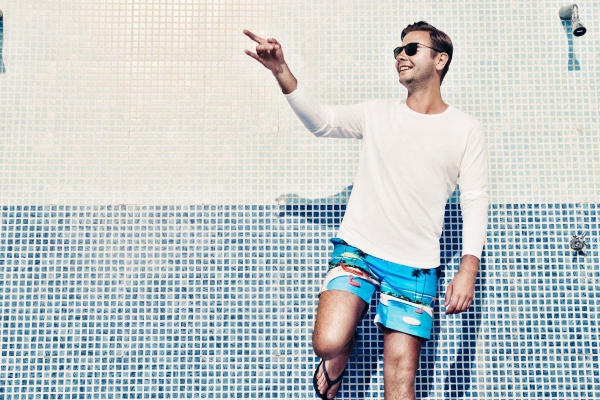 This sure-to-be future classic from Feldt kicks off with melancholy acoustic guitar plucks before JRM‘s mesmerising soulful vocals arrive to take your breath away. Plump kicks and snappy clicks bring the rhythm, and soft piano chords lift the track in the chorus before a triumphant lead riff plays out via three different sounds and instruments. The combination of whistling, chimes and trumpets makes for a seriously full, rousing sound that you can’t help but smile to.

The gorgeous video shows off Feldt‘s second swim short collaboration with Orlebar Brown, with Feldt wearing his own creation as he DJs to an audience of 1 in an abandoned swimming pool and water park. Aside from this stunning clip, Orlebar Brown will also be using the song itself in their own promo for the line. It’s a match made in summer heaven.

Unfortunately Feldt recently had an accident on his scooter, with a broken leg forcing him to cancel all his upcoming shows. He is undergoing surgery and will be recovering until August 23. In keeping with the positive attitude of his music, he’s keeping upbeat about the situation and feels that the sentiment of the song is more powerful than ever.