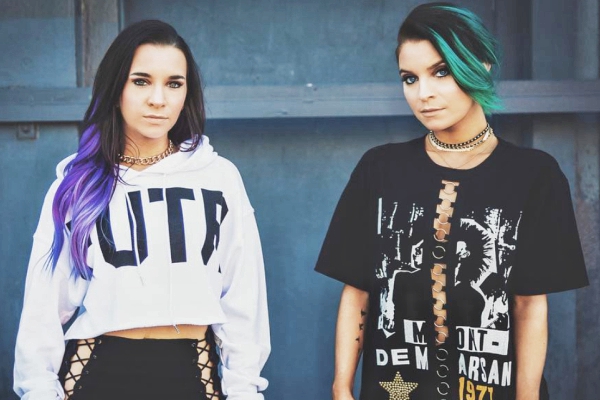 For almost ten years now, duo group Duelle has been making a name for themselves in the great vast soundscapes of the music industry. Not only are they DJs and producers, but these two are also rappers, singers and dancers, with a well-established visual and musical style.

Raised in Florida, Duelle is comprised of two sisters that are now based in Los Angeles. They got their initial start in the electronic dance music industry in 2013 featuring their vocals on songs from dubstep artists like Kayzo, ETC!ETC! and Protohype. Fast forward five years and you’ll find that Duelle have now been dubbed the trap queens of the dance music world, continuing to raise the level with each new powerful production.

As the two of you have gone through your careers, it’s clear you are both capable of presenting a powerfully heavy sound and unique style no matter the genre. The Duelle sisters are without a doubt the trap queens, however you guys have dabbled in other genres.

In the early record ‘Ice,’ fans are introduced to a tasteful future-house sound. Sometime following this in 2016, ‘Flicker‘ was a hit that had a drop that could be described as “trap meets hardstyle.” Then we get your popular heavy hard-house trap infused banger ‘D.M.N.D.‘ As Duelle, you two have clearly released a wide variety of tracks with genres ranging from dubstep, trap and future house to festival trap, hardstyle and future-bass amongst others.

What has it been like to sing, rap and produce in so many different genres and how do these experiences affect future productions and your style moving forward?

We always go off of vibes when we create and we love to experiment. We’ve also never wanted to be boxed in. The years of experimenting in different genres has actually helped us find our sound and what we think fits us the most. The goal with this new project was to be wholeheartedly true to ourselves therefore currently, a new wave hip hop / trap with pop infusion is the best way to describe our style moving forward and it’s never felt more right.

On the topic of your song ‘D.M.N.D.,’ you both have stated that it represents the fan base called DMNDMOB, how did this movement start and how has it moved with Duelle over the years?

The creation of our diamond logo was how it started which led to us calling our core fanbase the “DMNDMOB.” We are Italian so using the term “mob” was only right and we have the best fans in the world who rally HARD for us. They have stuck by us even with any changes in direction and our bond has only become stronger. To be a part of the “DMNDMOB” means not only being a fan of Duelle but being strong and always remembering the motto: “diamonds are created under pressure.”

Some of your most popular tracks have been catchy and hyped up 2016 hit ‘Gas Me Up‘ with Riot Ten, tasty, unique and powerfully choreographed ‘Louder‘ and heavy hitters ‘Stuck On Me,’ ‘Streets on Fire‘ and ‘Want It All.’ Across all platforms, these records make over half a million streams alone, with the music video for ‘Louder‘ garnering over 1 million views on Facebook!

Of course, ‘Louder‘ isn’t the only song with a titan-status music video, as the Trap Nation supported track ‘Want It All‘ also generated over half a million plays on YouTube! Amidst all the original productions and collaborations, you guys have also released a variety of mixes!

The mix series that steals the limelight without a doubt is your esteemed #2Faced Mix Series. #2Faced actually hit its fifth edition last year and like the others, it became increasingly better, more intense and more powerful than the last!

Clearly the two of you put a lot into these mixes. What’s your favorite part of this mix series? Mixes include more DJing, so one might wonder, what opportunities do these mixes give Duelle that other productions don’t give?

We always put a lot of time into our mixes and based off the reaction we have gotten since the first one we put out – it pays off. There’s something special about our energy and I think people know what to expect when a Duelle mix comes out. We like finding cool remixes and making edits of popular tracks at the time, things that we really vibe with. Then we take the time to make every transition flow and take you on a journey. Our mixes definitely give a little taste of what our live shows are like!

Putting aside releases for a moment, Duelle is also known for mind blowing performances with your beautiful vocals, tasteful rapping, racy lyrics and next level DJ sets. So much so, that the two of you have had packed crowds at some of the world’s biggest festivals like TomorrowWorld, Life In Color and Dancefestopia amongst many others, supporting big names like Skrillex, NGHTMRE, Borgore and Waka Flocka Flame!

As a group with such visual and musical style, along with being well-known for performances, between the two of you, what are each of your favorite parts of performing and making music as Duelle?

Well both of our favorite part about all of this is being on stage and performing. We’ve been on stage as dancers since we were 3 years old and the stage has always been home to us. The live aspect of performing our own songs and seeing the fans singing / rapping the lyrics is a way we connect on a different level. There’s no better feeling than your songs coming to life when you perform them live. As for making music as Duelle, we love being able to express different emotions through our music and writing lyrics. It’s a great outlet to release all feelings on different experiences you go through in life and turn it into a piece of art.

What has been your inspirations as DJs, producers, singers, rappers and dancers? What goes into your creative process as a group and what originally influenced your musical and visual style and continues to do so today?

Some of our biggest inspiration has been watching big artists careers as they grew. When we were younger Britney Spears was the reason we wanted to get into music because she was a dancer too and as we got older artists like Lady Gaga, Nicki Minaj and Beyoncé have all been big influences as far as strong female artists go. Not only musically but visually, with their branding and eccentric fashion styles as well.

As for our creative process, we always hear the start of a beat and both of us are always on the same page as to whether or not it’s a “Duelle” track. If it sparks up inspiration, we start writing lyrical concepts and ideas and lay them down and then go back and keep building the production around the vocals once they are recorded until the track sounds complete.

Duelle has released many original productions and mixes towards the end of 2017 and even a couple this year, but now as 2018 is rolling out, you guys have released your brand-new single ‘Level Up.’ It’s one of those songs that continues to cement Duelle as the trap queens!

With intensely powerful bass and the signature Duelle rapping style, ‘Level Up‘ is a tasteful track that is sure to grab the attention of fans everywhere!

As the latest track of 2018, what went into creating ‘Level Up?’ Specifically, what does the song mean to you two and what is most exciting for the release?

The song is about stepping up your game and reaching a higher level. This one came together super organically and we knew it was the perfect first single in the new direction. We want to empower people to keep pushing for what they want and never settle. We are beyond excited to release ‘Level Up‘ and start up some traction for what’s next for us. We have lots of exciting promos in the works around the release and we need everyone’s support by spreading the word and adding to your playlists on Spotify!

With a career that has spanned almost 10 years now, the two of you as Duelle have achieved quite a lot! From a variety of originals, collaborations, remixes and mixes across varying genres from all around the EDM soundscapes to performing live all around the world, you’ve done it all! As the hottest trap goddesses in the electronic music scene, Duelle will without a doubt consistently rise in 2018!

Finally, what have been the challenges you’ve both faced as female producers in the EDM scene and how have you overcome them? What advice can you give other aspiring artists of any kind who are working in this industry?

We have faced many obstacles and challenges along the way! It used to be frustrating and took ten times more work to be respected on the same level as men in the industry but on the positive side, there couldn’t be a better time for females to stand strong and conquer.

The best advice we can give is to never give up. It has taken us many years because people didn’t see our vision since we are different and unique, however every “no” we heard or set back motivated us to prove them wrong and we continue to do so. Hard work, believing in yourself and not being afraid to put yourself out there is what it takes. A diamond doesn’t start out polished and shining, it is a beautiful result of handling a lot of pressure. We can only hope to be an inspiration to other females as a perfect example of that.

I want to thank you both for taking the time to speak with me on behalf of EDM Joy! It’s great to have the chance to speak with two of the fastest rising trap producers making waves in the electronic dance music scene and rising female artists at that!

Check out Duelle‘s latest track ‘Level Up‘ and other music videos above and show some love and support for the one and only trap queens by following them, via their socials linked below!