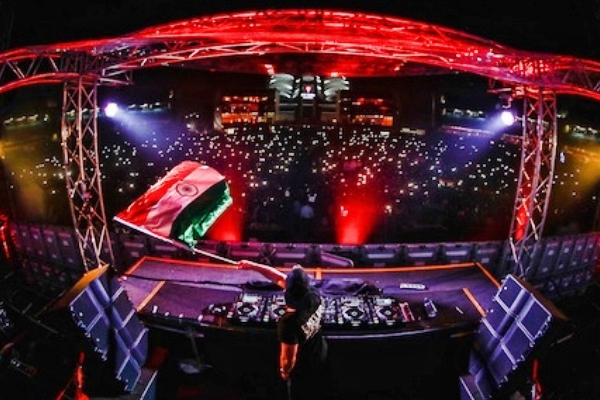 Hardwell – World’s Biggest Guestlist Festival 2017 – On Sunday December 3rd, 2017, global electronic pioneer and philanthropic figure Hardwell returned to Mumbai to once again partner with India’s Guestlist4Good Social Enterprise and Mumbai based non-profit organization Magic Bus for the World’s Biggest Guestlist Festival in association with his United We Are Foundation. Two years on from his previous visit in India, where Hardwell and partners provided education for over 18,000 young underprivileged children living in India.

This 2017 aid event succeeded in drawing a capacity crowd of close to 75,000 people at the D.Y. Patil Stadium and is on course to securing enough donations by fans and sponsors alike to bring a brighter future through education to more than 100,000 young children.

Capturing the hearts and minds of millions of fans around the world, Hardwell and his United We Are Foundation working with Guestlist4Good and the World’s Biggest Guestlist Festival managed to draw attention to the social issue of the lack of education for underprivileged children living in India. Utilizing his profile as an international electronic artist, former 2 x World #1 DJ and founder/ambassador for the United We Are Foundation, Hardwell, along with all the partners and World’s Biggest Guestlist Festival, was able to build upon the support and donations that the 2015 charity event received.

As such, Hardwell‘s decision was to not return to India until he could follow up on the earlier work that the Foundation and its partnerships had managed to achieve. Through a lengthy period of planning, the support of fans and sponsors, and the power of music, the second show was an opportunity for an even greater number of fans to either attend the show in support or participate by pledging their backing of the cause through donations. The second show also marked the first time Hardwell had performed in the country since that historic day back on December 13th, 2015.

Always wanting to push the scale of the event in a bid to achieve the target of the show, Hardwell invited friends to join him as part of the very special day. Completing the line-up on the day was fellow Dutch superstars and renowned DJ duo W&W (currently ranked #14 in the Top 100 DJ Poll). Also on the line were Revealed Recordings regulars Kill the Buzz and Suyano who provided additional DJ support on the day. Another name was local DJ hero and emerging star Shaan!