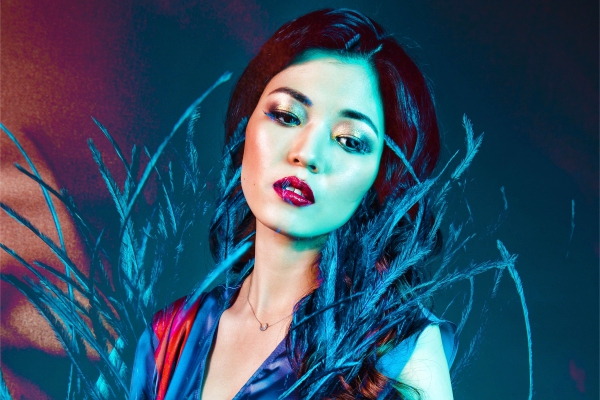 Hi Sena! While you’ve only just debuted this year, you have been crafting and honing your skill for quite a while! From participating in theatres, clubs and high school musical performances at a young age to later attending a prestigious music academy in Japan, you finally showed the world who Sena Kana is.

If one were to listen to ‘Live Your Dreams‘ and even more, embrace the genuine accompanied official music video, they would see that your talent and enthusiastic power is a force to be reckoned with. Not only is your voice smooth and unique, but your vocals encourage others to go for their dreams, their goals and aspirations.

Your recent success since releasing ‘Live Your Dreams‘ must have gone by like a whirlwind of excitement! While you hit #1 on the European iTunes Charts, #1 on the Netherlands’ and France’s iTunes Top Singles Chart and stepped into the Top 5 in Italy’s chart, you also released a music video to boot.

The music video presented the Sena Kana musical style along with your artistic style and a bit of your vision. What was your intentions with your sound, your fashion and the vision represented within the music video for ‘Live Your Dreams’?

I know that dreams come true when you believe, don’t give up and take all necessary steps. The song is about it and the idea is mine. It came to mind suddenly. Usually, we start with the theme I imagine, which my team takes as a basis, and the final decisions are made depending on how the result fits the images that I have in mind. We make the lyrics the same way, and I think that thanks to that, my message and my feelings are 120% conveyed.

When I saw the photos that the director showed me, I knew at that very moment it was going to be very beautiful. Oslo Opera House – is amazing, it’s like a spaceship! It became our first location. And since this song is about dreams coming true, I thought that filming PV in Norway will help to make the message of the song even stronger. About the artistic styles, it took us not one day, not even a month. I have many styles but all of them convey my individuality, Japan flavor, and positive inspiration. Many thanks to the very talented stylist Lesya Patoka for her amazing ability to feel the message and materialize it.

Who inspires you as an artist today, what do you enjoy listening to and where does your sound and style derive from?

Really, my music preferences are quite wide as I have been listening to The Beatles, Celine Dion, Diana Ross, Julie Andrews (since I loved musicals), and Japanese pop-music. I think that they all had an influence on my professional growth. Definitely, I’d mention Adele and Ed Sheeran, who inspire me the most not only because they are world famous hit-makers but also very bright personalities with amazing charisma.

This is, of course, your very first record, which must be exciting, considering your global success across a multitude of country’s and fans. Not only did you debut your career as an artist, but you had the chance to show your style, to represent a message and ultimately show the world the raw talent you hold!

Moving forward, what are your goals for the rest of 2017? Is there anything else fans of Sena Kana can expect as we move into 2018? And finally, will fans around the world get a chance to see you perform on tour in the near future?

My new single will be positive and light, as always. It’s very exciting to work on it as we experiment a lot with vocal manner and sound. Just like the previous one, we are making this song with the team from Stockholm. Also, a new music video is planned till the end of 2017 and a couple of live performances with choreography. Next year is bringing even more challenges as beside Europe we’d like to melt the hearts of the American audience. So, much is really on the way right now, lots of work and we do our best for the next songs not only to hit iTunes charts but strengthen their positions on the Billboard charts too.

Thank you for chatting with us Sena Kana! Enjoy the well-deserved successes!