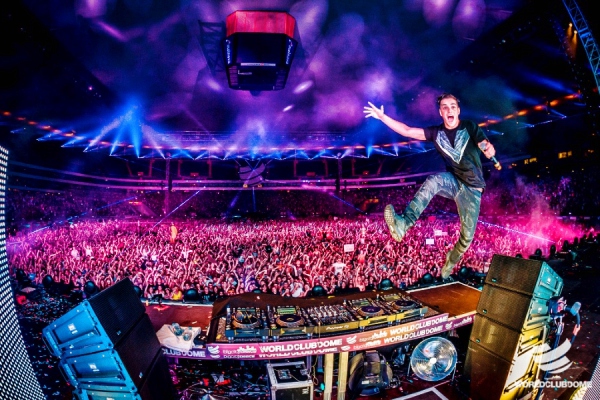 World Club Dome – Martin Garrix – For the third time in succession the BigCityBeats World Club Dome, the Winter Edition this year will be hosted in the Schalke stadium. After the smash-hit editions of the last two years, when BigCityBeats transformed the Veltins Arena into one of the biggest clubs in the world, first with Hardwell and then with Dimitri Vegas & Like Mike, fans are already gearing up for this year’s headliner.

At the third Winter Edition on November 11th, 2017 it will be the turn of Martin Garrix to stoke up the Schalke stadium to boiling point. This will be the third year in succession that BigCityBeats have attracted DJ Mag Top 100‘s current No. 1 DJ to Gelsenkirchen.

On the 5th anniversary of the World Club Dome, BigCityBeats pulled off another success story, drawing 140,000 fans to Frankfurt, laying on the BigCityBeats Club Jet, the BCB ICE Club Train, the WCD Pool Sessions and a new Club Forest area and dressing up the entire, breath-taking area around the stadium to produce the biggest clubbing site in the world. Now, the World Club Dome party is rolling over into the Winter Edition and turning the Veltins Arena in Gelsenkirchen into the “biggest club.”

Martin Garrix has been on a meteoric rise ever since his ‘Animals‘ single hit the charts. The young Dutch producer and DJ has established himself as a superstar of the electronic-music world, securing a place in the pantheon by nabbing the No. 1 spot in the DJ Mag Top 100. Following on from hits like ‘Animals,’ ‘Wizard‘ and ‘In the Name of Love,’ his latest singles this year ‘Scared To Be Lonely‘ and ‘There For You‘ have both been roaring up the charts around the globe. After his fantastic set at the 2017 BigCityBeats World Club Dome, he will be looking to make history with one of the biggest solo shows of his career.