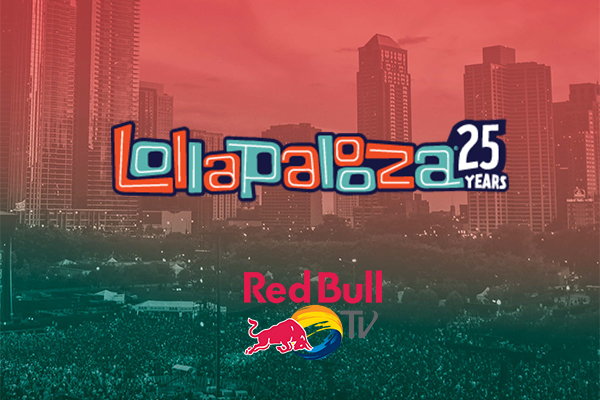 Lollapalooza 2016 Live Broadcast On Red Bull TV – Celebrating its historic sold out 25th anniversary, Lollapalooza returns this weekend to Grant Park where an estimated 400,000 music fans will experience some of the biggest names in music right in the heart of downtown Chicago. One of the longest-running American music festivals, the 2016 installment of Lollapalooza will expand to four days for the first time ever, and Red Bull TV will once again offer fans around the globe a free, all-access pass to tune in to all of the action throughout the weekend. The live broadcast starts this Thursday, July 28, at 6pm CDT and continues all weekend long. Fans can visit redbull.tv/lollapalooza for lineup announcements, festival highlights, and exclusive content throughout the weekend.

Throughout the broadcast, hosts Sal Masekela and Hannah Rad will guide viewers through all the best Lollapalooza has to offer – from live performances to artist interviews and reflections on some of the most memorable moments from the past 25 years.

Tune-in for free online at redbull.tv/lollapalooza or from any device by using the Red Bull TV app. Fans can also watch online at Lollapalooza.com. Live coverage begins July 28, 2016 at 6:00pm CDT and continues all weekend long with replays running through August 1.  Selected performance highlights and interviews will be available on demand on Red Bull TV.

Lollapalooza has grown into an annual world-class festival in Chicago (2005), as well as culturally rich countries including Chile (2011), Brazil (2012), Argentina (2014) and Germany (2015). Lollapalooza is one of the premier destinations both for music fans in the United States and abroad. In 2015, Lollapalooza hosted 300,000 attendees over three days and provided over 155 million dollars in local economic impact.  In celebration of the 25th Anniversary, Lollapalooza has expanded to four days in 2016, featuring more than 170 artists performing on 8 stages.

A global media company, Red Bull Media House produces, publishes, distributes and licenses high-quality sport, entertainment and educational programming from the areas of Sport & Lifestyle, Nature & Science and Tradition & Inspiration. Its product portfolio includes sport and lifestyle programming, documentaries, feature films, music, games and mobile apps, as well as print and online magazines, that fascinate and inspire audiences all over the world – through all media channels and on all types of devices. http://www.redbullmediahouse.com