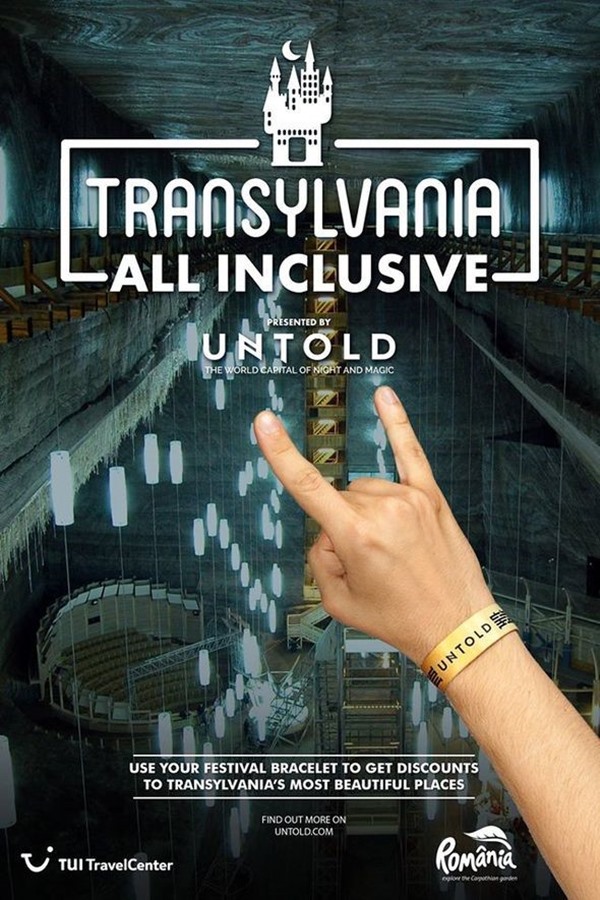 The new BEST MAJOR FESTIVAL of Europe, UNTOLD festival, aims to be more than a music festival, an international ambassador for Transylvania, the land of Dracula.

Between 5th and 19th of August, after enjoying the festival’s second edition, tourists can use the festival bracelet to gain free or discounted access to some of the most important tourist attractions in Transylvania: Bran Castle – home of Dracula, White Citadel, Corvin Castle, the Merry Cemetery, the Mocănița Steam Train, the Turda Salt Mines, and many others. The Transylvania All Inclusive campaign was launched today during The International Conference of Worldwide Tourism Organization, with the participation of the General Secretary of ONWTO, Taleb Rifai.

“Transylvania has always been surrounded by magic. Countless legends of this region still fascinate people. With Transylvania All Inclusive we offer [them] a chance to stay here longer, after the UNTOLD Festival, and discover this land of magic,” said Bogdan Buta, General Director UNTOLD Festival.

A natural beauty and a magic piece of history, Transylvania is the no. 1 must see destination of 2016, according to Lonely Planet. Festivalgoers can choose to visit the North or the South of the region. In the south they can discover impressive citadels and fortified churches in Alba Iulia, Sibiu, Brașov, Sighișoara, Turda Salt Mine, Viscri, Prejmer. The North will definitely be an amazing journey visiting wooden outstanding churches, The Merry Cemetery of Săpânța, the steam train of the Vaser Valley and many other local attractions.

This August, tourists can now see the highlights of Transylvania and enjoy The Best Major Festival in Europe! Book Festival tickets, accommodation and find out more about Transylvania All Inclusive from www.untold.com and www.tui-travelcenter.ro.

The “Transylvania All Inclusive” campaign is presented by UNTOLD festival, powered by ANT with the support of McCann București.

The first edition of the UNTOLD was an enormous success reaching a total of 240,000 visitors, and has been awarded BEST MAJOR FESTIVAL at the European Festival Awards 2015. Two new awards go to UNTOLD’s Festival Pay With Blood campaign this 2016, one SILVER LION in PR and one BRONZE LION in Media at CANNES LIONS INTERNATIONAL FESTIVAL OF CREATIVITY.