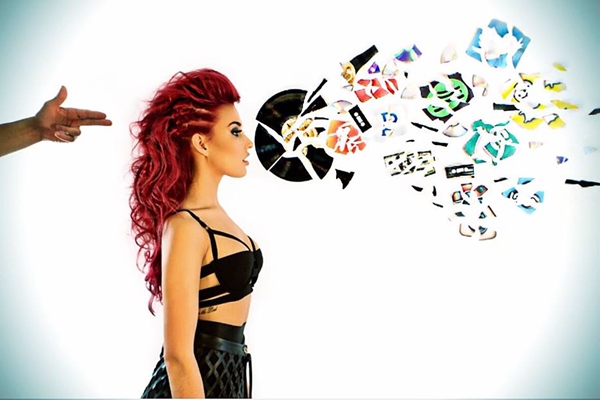 Five days ago, singer and songwriter, Shaylen, released her new track, ‘Kamikaze.’ With production and mixing by Cory Enemy, she really gets a chance to express her style as a vocalist and electronic dance music artist.

Shaylen and Cory Enemy are both artists coming out of Los Angeles. Cory Enemy has been releasing music for more than five years, producing sounds along genres such as trap, dubstep, techno, future bass, future house, and more. His notable tracks are originals such as ‘Nobody Else,’ ‘Right Now,’ ‘Cory,’ and his remix of Ember Island‘s cover of ‘Where Are Ü Now.’ Shaylen has been singing and writing lyrics for a little over a year now. She has featured her vocals with artists, DJ Chuckie and ChildsPlay, on their track ‘Warrior.’ As of now, Shaylen has been featured on genres such as future pop and trap. Before closing, I got to have a few words with the artist herself.

Q: How long have you been singing and writing lyrics and have you had any role with production?

I have been singing my whole life! I was in a pop group called savvy for 10 years. I recently got out of my contract with Cash Money Records, and was on a kids show here on Starz Kids and Family called “The Wannabes Starring Savvy,” so singing has been the main thing in my life since I was little! I wrote ‘Kamikaze’ and all my songs that I’m releasing! I haven’t gotten into production quite yet, but I want to very soon!

Q: What were your inspirations/influences for making Kamikaze and do you have anything you’d like to say about how working with Cory was like?

Corey is a musical genius. He literally knew exactly what I wanted ‘kamikaze’ to sound like and took it there and made it real life for me. Which as an artist is everything when you have a connection with a producer like that. Truly an honor to work with him. ‘Kamikaze’ is about sacrificing yourself. In love and in life, sometimes you go all the way with no thought of self or of what damage you might do. I really relate to that idea because we are all self destructive sometimes. It was produced by Cory Enemy, who has produced for Dillon Francis and A-Trak. It was co-produced by Rice N’ Peas, who has produced for G Eazy. I wrote it with Ameerah Roelants, Jared Cotter, and Jeremy Skaller, who have written for artists David Guetta, Jennifer Lopez, and Jay Sean.

Q: What genres in EDM do you like and what do you plan on making in the future?

I love anything in that world. Future pop, future bass, electronic pop, the weirder shit sounds, the more I like it!! You’ll hear more electro pop/future pop with some crazy drops and some special features in the near future.

Q: When can fans expect to get another track from you? Do you have a genre, name, collaboration, or extended play in mind?

I will be dropping another track pretty soon! Its in the electro and future pop family!

It was great having a chance to chat with Shaylen. There is so much coming from this artist. She has passion, drive, and attentiveness to detail, quality, and freshness.

What is enjoyable about her track, ‘Kamikaze,’ is that it has a Jack Ü style with a vibe similar to that of Justin Bieber‘s, ‘Sorry,’ and Jack Ü‘s ‘Where are Ü Now.‘ This future bass and pop vibe aided with tropical percussion drums definitely drive the track with her beautiful vocals. As this song is completely fresh, Shaylen is sure to continue her success as a singer, songwriter, and vocalist for electronic dance music.