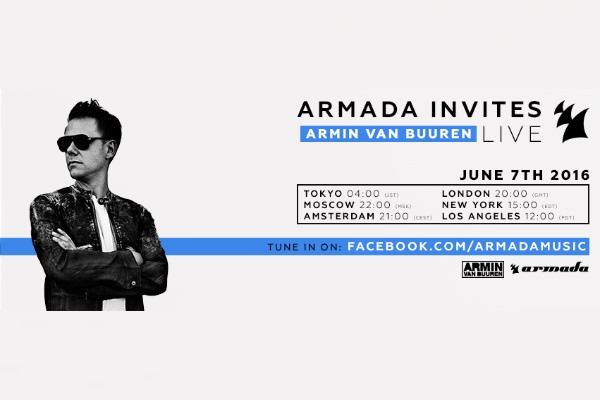 Following a grand first edition on April 29th that featured new signee Erick Morillo, none other than Armin van Buuren is to headline the second ‘Armada Invites’ event. The new ‘Armada Invites’ concept indulges in exclusive showcases in an intimate setting, all of which are to be broadcast live on Armada Music’s Facebook page.. The world-renowned DJ and producer is to take the decks from 9 PM till 10 PM (CEST) on Tuesday June 7th, supported by one-hour live sets from Dutch DJ and producers RODG and Ruben de Ronde.

‘Armada Invites’ is a recurring event in Armada Music’s own in-office club in Amsterdam, comprising exclusive showcases from some of the biggest and/or most talented artists in the world. The event reaches a worldwide audience through the livestream on Armada Music’s Facebook page. Erick Morillo’s spectacular kick-off of the brand-new series enjoyed massive success both on Armada Music’s socials and in the club itself, same is expected of this second edition with Armin van Buuren as headliner.