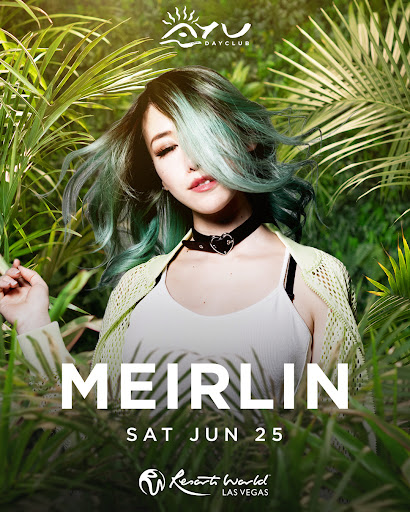 Japanese DJ and Producer, MEIRLIN firmly claims her spot in the dance scene with the announcement of her brand-new club show residency in Las Vegas. Taking place in Las Vegas’ new hot spot hotel right off the strip, Resorts World Hotel & Casino, MEIRLIN will be performing as residency DJ in partnership with Zouk Group venues, Zouk Nightclub and Ayu Dayclub.

“I’ve been very grateful and honored to be a part of such an amazing team and build an epic new venue, getting to play alongside some of the world’s finest talents in the industry. I remember that I set a goal 3 years ago to play in Vegas one day, I never expected that it would actually happen, but I’m very happy it did and feeling very inspired and proud. I’m so thankful for people who always support me and believe in me.” – MEIRLIN

MEIRLIN has performed at many top-rated nightclubs including Exchange LA, Academy LA, and Avalon Hollywood and has performed at massive dance festivals including Insomniac Events’ Beyond Wonderland, Belasco Theatre, Stereo Live in Houston, and leading venues in Orange County, San Diego, Hawaii, Portland, and Atlanta among others. She has also shared the stage with some of the biggest names in music, including Tiësto, Zedd, Nicky Romero, Timmy Trumpet, Oliver Heldens, Cash Cash, Laidback Luke, Gareth Emery, Ookay, Elephante, Shaun Frank, Ummet Ozcan, and more.

In addition to her new residency, MEIRLIN recently dropped her infectious new single with Valy Mo titled, “Mess” out now via Showtek’s Skink label. Take a listen now and be sure to catch MEIRLIN at her next show on June 25th at Ayu Dayclub!

MEIRLIN is an international DJ/Producer based in LA originally from Tokyo, Japan. Innovative, creative and cutting edge are the three best ways of describing her music style. She started her musical journey when she was introduced to the classical piano at the age of three. To bring herself more challenges and inspiration, she decided to move to Los Angeles and started DJ performance and music production. Since then, she started playing at major venues which are ranked in DJ Mag’s Top 100 clubs such as Exchange LA, Academy LA and Avalon Hollywood. This earned herself a spot as a resident at these well established Insomniac clubs where she has shared the stage with many well known artists such as Tiesto, Zedd, Nicky Romero, Timmy Trumpet, Oliver Heldens, Cash Cash, Laidback Luke, Gareth Emery, Ookay, Ummet Ozcan, Pegboard Nerds, DallasK, Shaun Frank, Elephante and more.

She’s been officially added to Insomniac’s artist list since 2018 and made her debut at Beyond Wonderland in 2019. In 2021, she earned a residency at Zouk Group/Resort World in Las Vegas. This is the hottest nightclub in Las Vegas where world famous artists (Celine Dion, Katy Perry, Miley Cyrus, Carrie Underwood, Luke Bryan, Calvin Harris, Tiesto, Zedd and more) hold residencies. Not only that but she has also expanded her career overseas and has played in Brussels/Belgium, Guangzhou/China, Cabo/Mexico, Bangkok/Thailand and her hometown Tokyo, Japan. She has released several singles such as ‘Mess’ on SKINK Records by Showtek, ‘In California’ on Hoop Records, ‘MAZE’, ‘Alone’, ‘All I Know Is You’, ‘East n West’, ‘Sakura’ and more. She also released her debut album ‘Night Forest’ in 2020. The electronic music scene should be expecting major breakthroughs by MEIRLIN in the upcoming year.