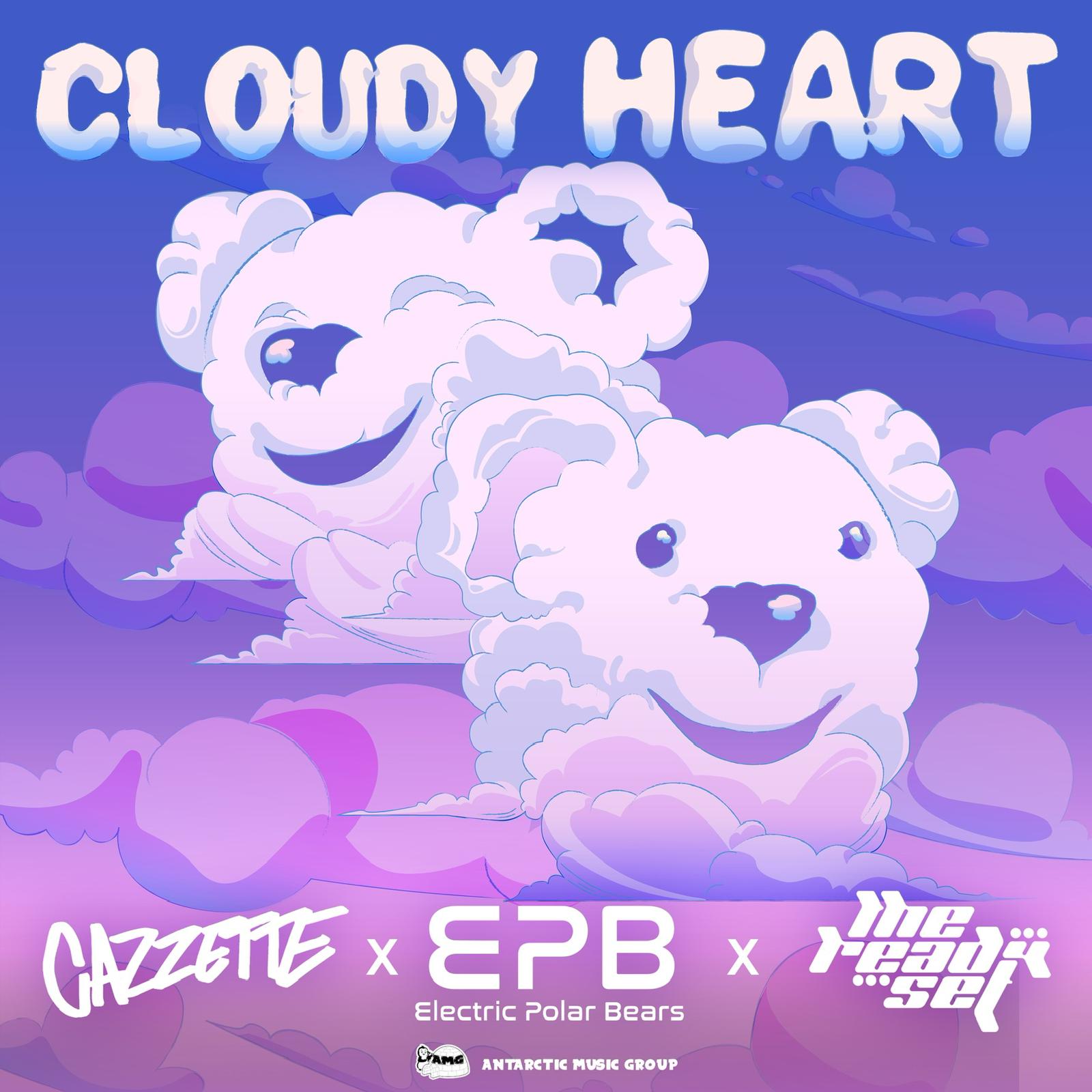 After making waves in 2021 with a multitude of releases, teaming up with some of the industry’s most sought-after producers and vocalists like Paris Hilton, Nitti Gritti, tyDi, and Naz Tokio and performing at various festivals including a performance at Paris Hilton’s wedding party – the playful and mysterious masked duo Electric Polar Bears return with their newest single, “Cloudy Heart” featuring CAZZETTE and The Ready Set.

“Cloudy heart was a joy to work on. Everyone involved has been so great and it was really fun building a song from the ground up with the team involved. It’s rare for me to create instrumentals in its entirety today and have talented vocalists write and sing on it afterwards. I usually start with the vocal and build the music around it which is the opposite in this case. The song brings me back to my earlier days in dance music and it’s incredible that the workflow also represents the way I worked back then. I’m happy presenting this throwback gem (according to me) with everyone” – CAZZETTE

“Cloudy Heart” sees Electric Polar Bears joining forces once again with famed indie emo pop act, The Ready Set comprised of singer/songwriter and producer Jordan Witzigreuter. The boys of EPB have previously worked with The Ready Set (who is set to perform at the When We Were Young festival) for their catchy 2021 house tune, “Too Good To Lose.” And, for the first time Electric Polar Bears have teamed up with Swedish powerhouse DJ/Producer duo CAZZETTE, known for their hit singles such as “Beam Me Up” and “She Wants Me Dead.” Offering the perfect soundtrack to kick-start summer 2022, “Cloudy Heart” is a dreamy melodic filled electronic dance tune that seamlessly combines elements of dance, house and indie vibes into a mesmerizing and captivating song from start to finish. The Ready Set’s pop-rock vocals and Cazzette’s signature blend perfectly with Electric Polar Bears’ dynamic playful sound. Electric Polar Bears ushers us into the summer with yet another hit on their hands.

In addition to their new single, the masked duo have also landed 6 international radio residencies for their radio show Igloo Radio. The residences include Spanish radio show Radio Studio Pui Ibiza, the dance station of Ibiza and Formentera every Tuesday at 5am CET (11am ET) together with Timmy Trumpet, Mahalo, Defected Records, Velvert Code, Steve Aoki, Ultra Records, Afrojack, Dimitri Vegas and Like Mike along with radio shows in Thailand, Russia and England.

The Electric Polar Bears (EPB) were born out of the love in combining detailed stage level production with funky fresh bouncy house beats. Headquartered in their Antarctic laboratory, Polar Bears Zero and Snowball have amassed everything you might need to throw the ultimate dance party. From their giant custom 2000 LED heads to confetti cannons, lasers, frost machines and even their own penguin brigade, no festival experience is complete without the Polar Bears running the “snow.” The duo ended 2021 strong by releasing singles with Paris Hilton, TyDi, and The Ready Set. They also have hit the radio airwaves with tracks “Simple Things” and “You Never Know.” By combining forces with their DJ and promoter friends, Zero and Snowball have traveled to stages around the world bringing their experience to life for the masses; even bringing their personal touch to Paris Hilton’s Neon Wedding in Fall 2021. With shows throughout the United States and Mexico already completed; the Bears have already kicked off 2022 strong with the plan of bringing the magic of live dance music to audiences around the world.

Influenced by dance music worldwide, CAZZETTE is a creative music project by Alexander Björklund and Sebastian Furrer formed in 2011. Since then, CAZZETTE has been an outlet for the desire to twist and bend genres within the dance music scene. As the first act ever to have a Billboard number one without having signed the song to a label, their song “Beam Me Up” set them off touring worldwide. A sense of innovation and pushing boundaries has always been a part of CAZZETTE. Their debut album “Eject” was the first-ever streaming exclusive album released via Spotify in 2014. “Eject” represented the first-ever blend between dubstep and house and played an essential role in shaping the sound of the current dance music.

Later on, with the song “Blind Heart” featuring Terri. B, CAZZETTE once again climbed the charts and ended up at the top of Billboard with updated influences by classic house rather than aggressive dubstep evolving their sound. Since then, the duo has released multiple hits and received a Swedish Grammy nomination for their modern dance music classic “Sleepless” featuring “The High.” The single achieved gold in Scandinavia and has streamed over 100 000 000 times worldwide. CAZZETTE has played at almost every major dance music festival worldwide, performing in the USA, Japan, India, Belgium, and more with over 1 000 000 monthly listeners.

About The Ready Set:

Jordan Mark Witzigreuter (born November 14, 1989) known professionally as The Ready Set, is an American platinum selling recording artist and singer-songwriter from Fort Wayne, Indiana, United States. He has released five studio albums, Syntax and Bright Lights, Tantrum Castle, I’m Alive, I’m Dreaming, The Bad & the Better, and I Will Be Nothing Without Your Love, six extended plays and seven singles. He is best known for the commercially successful single “Love Like Woe” from his major label debut I’m Alive, I’m Dreaming.

In this article:cazzette, electric polar bears, the ready set