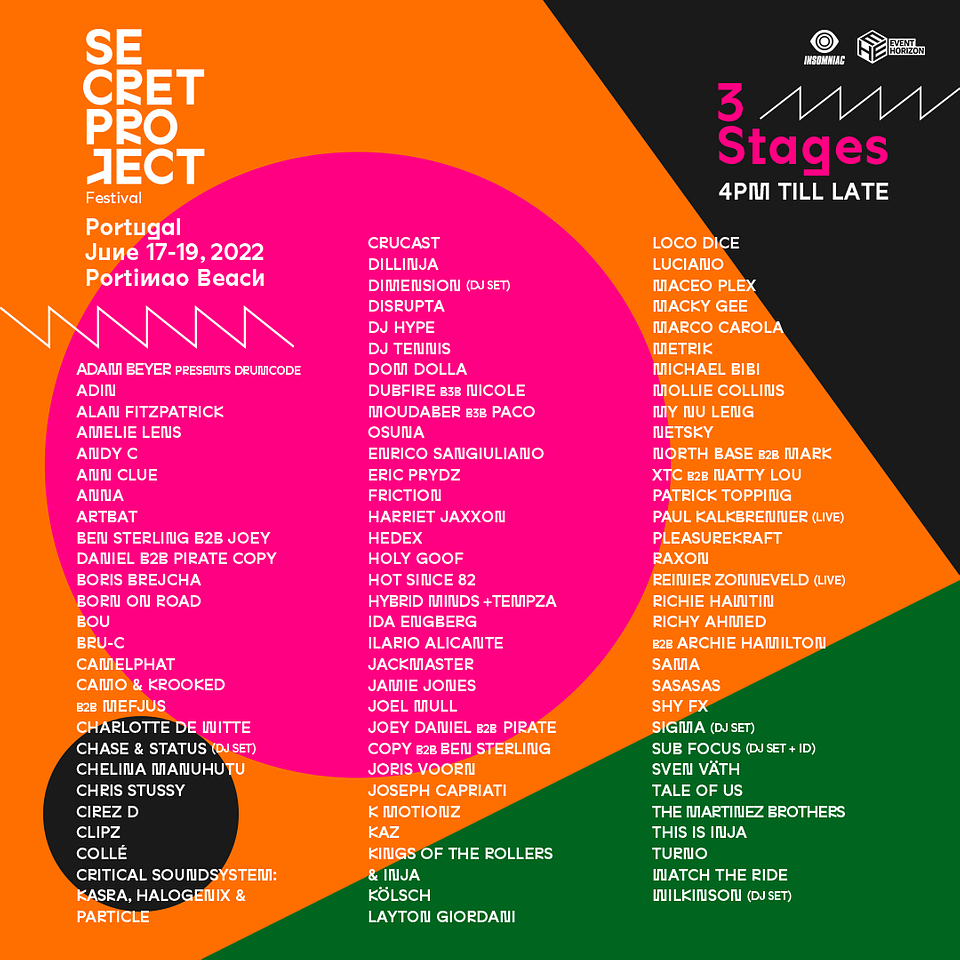 Acclaimed Los Angeles-born Secret Project Festival makes a much-anticipated return to Europe this summer by taking over Portugal’s gorgeous Praia da Rocha (Portimaõ Beach) from June 17th to 19th 2022. The Portugal debut will be filled with house, techno, drum & bass, and disco and is set to be bigger and better than ever before. A brand new drum & bass stage is added on top of the house and techno stages which will be headlined by the likes of Adam Beyer, Alan Fitzpatrick, Charlotte de Witte, Chase & Status, DJ Tennis, Eric Prydz, Friction, Hybrid Minds & Tempza, Ida Engberg, Jamie Jones, Luciano, Maceo Plex, Marco Carola, Paul Kalkbrenner, Richie Hawtin, Shy FX, The Martinez Brothers and many more. The pre-sale starts Friday January 28th at 1AM PT / 9AM GMT / 10AM CET, and the regular ticket sale starts Friday January 28th at 3AM PT / 11AM GMT / Noon CET.

Secret Project Festival is an oasis of art, music, murals, and live graffiti that welcomes only the most cutting-edge artists whether pioneering legends or red hot new talents. A whole spectrum of underground electronic sound is always represented and, last year, the festival debuted to great acclaim in Europe with a sold out crowd of nearly 20,000 attendees during ADE. After that raw, industrial-tinged event, the festival now switches it up and heads south to Portugal for a more organic and sun-kissed affair on sweeping sandy beaches with dramatic limestone rock formations and stunning views of the ocean.

Taking advantage of Portugal’s long hot days and balmy nights, music will play across all three stages, on all three days, all night long. The sub-tropical setting will add an extra dimension to Secret Project, on top of its already famous production quality and mesmeric audio-visuals. As well as the unmatched soundtrack, festival-goers can look forward to exploring a rich array of local cultures and cuisines, beach sports, water activities, restaurants, and bars during their stay in this spectacular setting.

Drum & bass legends Chase & Status head up the new stage this year, and there is plenty of house to look forward to. From cultured Italian and Life And Death boss DJ Tennis, Ibiza favorites Jamie Jones and Ilario Alicante, and a special back-to-back between Richy Ahmed and Archie Hamilton, to party-starting duo The Martinez Brothers, UK sensation Michael Bibi, Grammy-nominated pair Camelphat, and spaced-age selector Chris Stussy, as well as more from Pleasurekraft, Cirez D, and plenty of others.

With its tasteful cross-section of forward-thinking electronic sounds and stunning location, Secret Project Festival Portugal is a perfect reason to get away and party in paradise this summer.

Tickets are available from January 28th, 12pm CET, via portugal.secretproject.com.