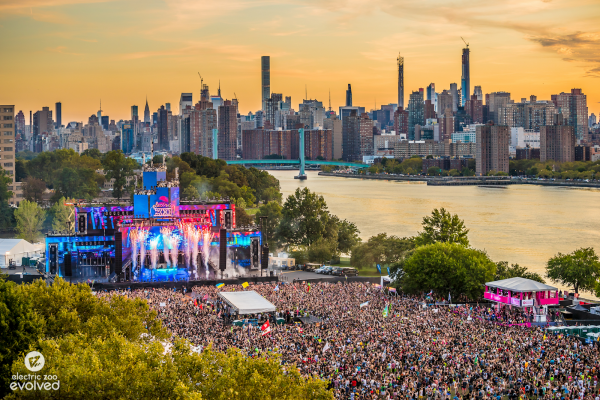 Electric Zoo: Evolved – New York City’s longest-running and largest electronic music festival—came out of its 11th turn with its most successful show since 2013.  Taking place this Labor Day weekend, Friday, August 30, Saturday, August 31 and Sunday, September 1 at Randall’s Island Park, over 107,000 fans turned out to embrace the sunshine and outstanding sets from over 50 international DJ talents.  Out of the three-day event, Saturday and Sunday drew sold-out crowds.

There were many highlights for electronic music enthusiasts over the weekend including epic headline performances by Above & Beyond, Eric Prydz, Dog Blood (Skrillex :: Boys Noize), Diplo, Afrojack and Armin Van Buuren with spectacular sunset sets from the mainstage by Kaskade, ZEDD and Allison Wonderland.

Mainstage performer DESTRUCTO hosted the Ezoo debut of the ALL MY FRIENDS stage – each day highlighting tent-packed sets, including from Malaa, Anti Up and Camelphat, while Eric Prydz did a second turn to host the Pryda Arena with Yotto, Jooris Voorn and Green Velvet on Saturday’s bill.  Brownies and Lemonade brought out in the best of West Coast bass with sets from Getter, 4B and Yultron on Friday.

ALL MY FRIENDS Stage Photo by aLIVE Coverage for Electriczoo.com

Sunday night SLANDER + NGHTMRE’s Gud Vibrations crew slammed the Hilltop Arena with hard-hitters GTA, SAYMYNAME and Whipped Cream while next door’s Riverside Stage Seven Lions presented a selection of talents from his Ophelia label from newcomers Crystal Skies and Wooli to Kill the Noise and Said The Sky.

Beyond the stages from the hottest brands in dance music right now, there were also memorable sets from the likes of mainstays Excision, Flux Pavilion, Benny Benassi and Boombox Cartel to newcomers Sullivan King, i_o, Midnight Kids and MIME.

Festival-goers were also treated to a fantastic viewing deck with a meet & greet with Above & Beyond, and a fast lane for quick entry and transportation to the festival via ferry sponsored by T-Mobile.  Fans got to cool off at the Kia Soul Station human car wash experience as SIRIUSXM conducted live interviews with various performers. The official apparel partner Sik Silk offered face painting.  Other partners featured at Electric Zoo were Svedka, Redbull, Espolon Tequila, Heineken, Zenni, Darrel Lea, Sour Punch, Essentially Geared Wine, Electric Standard Co and Fest Express.

Look for Electric Zoo to return to Randall’s Island in 2020.