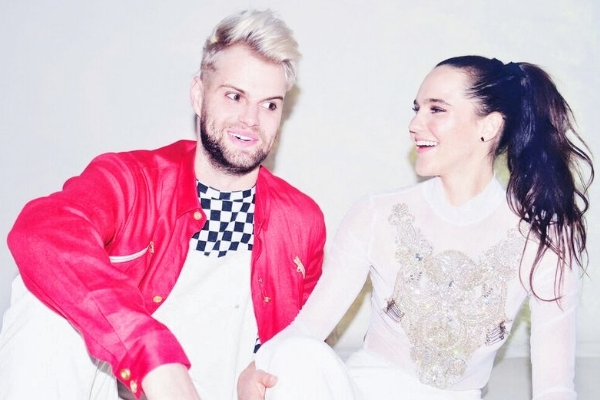 Sofi Tukker – 2018 Interview – A lot has happened here at EDM Joy in 2018. We’ve seen a variety of tasteful content coming from rising artists like young and mysterious dubstep artist Virtus and his unique ‘Dark Prince Rising,’ Oakland raised Californian-based DJ, producer and vocalist Safia Mafia on her R&B, funk, soul hip-hop and electronic infused single ‘Vices‘ and inspiring artist DJ Huguito, who fights a disease that brittles his bones to easily break, with his love of music.

Of course, we have also covered material ranging from this years edition of Miami Music Week in March, Ushuaïa Ibiza and Ultra festivals amongst others, releases from labels like Circus and STMPD and some of the other hottest artists in the scene! Amidst the song releases, news and events, I am now pleased to offer the exclusive look into the exciting lives of Sofi Tukker!

Hi Sophie and Tucker! You guys have been in the scene for a few years now, but last year was without a doubt an exciting, powerful and defining time for Sofi Tukker! Not only were you guys riding on the previous success of debut album Soft Animals and one of its popular tracks ‘Drinkee,’ but you guys eventually exploded onto the scene with wildly popular ‘Best Friend!’

Since ‘Best Friend‘ entered the EDM soundscapes, it created a multitude of possibilities for Sofi Tukker, such as entering the top 40 on the Radio, landing an appearance in an Apple iPhone X television spot, cumulatively collecting over 20 million streams across all streaming platforms and even inspiring a fantastically directed and choreographed music video.

Directed by Mac Boucher, the official music video for ‘Best Friend‘ takes place on Ibiza with artists NERVO, The Knocks and Alisa Ueno. You guys seemed to truly embrace the experience and have fun with the music video!

While you guys have seen success before, what was it like to experience creating the music video, have the track appear on an Apple spot and see this sexy 90’s style throwback / hybrid future edm record evolve your career? Was it all expected?

Definitely not expected! We loved the song because it was a song about friendship with friends: celebrating the best thing in the world and just having fun. We didn’t know it would be a single and we definitely didn’t anticipate it going to radio or anything. It was actually right after we finished filming the music video in Ibiza with everyone, when we watched the Apple Keynote and discovered that the song would be on the commercial for the iPhone X!

What have been some of your favorite moments putting together ‘Best Friend’ and what were both of your inspirations and the creative process that went into designing the song?

It started with Tucker in the garage, he was working on the bass and had the “do u wanna do u wanna” part. Sophie came in and started riffing about her best friend from college, who she had just been on the phone with. And then we made the cowbell part. After that, we didn’t really know what to do with it, so we figured we would send it to Alisa Ueno, who Nervo told us about, for a Japanese verse (cuz why not?!) Nervo got back to us and said they’d like to get on the track too. So, then we had this puzzle pieces of parts and figured that, since it was a song about friendship, we should get our best friends from New York, The Knocks, on it too!

Of course, the music video, TV spot and streams aren’t the only things that ‘Best Friend‘ helped shape the Sofi Tukker career with in 2017! Fans, old and new a-like, got to see you both perform on tour with ODESZA in the United States and in Canada. Fans even got to see a variety of interviews, participate in Q&A’s with you guys on Reddit and keep up with your fun-filled, exciting lives on Instagram!

2017 was quite the ride for you guys! How did the two of you meet? Just as interesting, how did you guys bring your spunk into the unique, tasteful and creative styles of Sofi Tukker?

We met at college our senior years. We came from totally different backgrounds and in the process of finding common ground, the style of Sofi Tukker was born. It’s just the place where our two brains meet and what happens in that meeting!

Sophie and Tucker, not only is your music groundbreaking, as exemplified in ‘Best Friend,’ but you’re both stylish and always matching! What creates your motivation and drive to be fun, creative and attentive to detail all at the same time?

It’s the most fun! When we were kids, we would get together in our free time and play with our friends: make music, play dress up, dance, create forts, scheme, make a mess. We are just still doing that! Always trying to live in that spirit of childhood friendship!

‘Best Friend‘ has been so popular that it even created a slew of official remixes supported by Sofi Tukker. Some have included artists like Sinego, Amine Edge, featured artists NERVO and even a carnaval version from yourselves! Notably, popular DJ and producer Oliver Heldens also released his official highly-energetic and bassy take on the track.

Clearly, Sofi Tukker is versatile in musical styles and genres. For both of you respectively, what are some of your favorite genres and sounds to listen to and what inspires what goes into your own music?

Tucker is a real house music guy, that’s what started his love for DJing and remains a huge part of Sofi Tukker. He also grew up listening to a lot of rap and hip hop as a basketball player, had a punk phase, had a phase listening to Chic with his parents, and more… Sophie grew up moving to different countries and international schools so her musical influences from growing up are all over the place: jazz, Brazilian bossa nova, folk…

It was announced towards the end of 2017 that Sofi Tukker was headlining a European tour in January and February in 2018, as well as performing at Estéreo Picnic Colombia and Lollapalooza Brazil! We later find out that the two of you are touring on the Treehouse World Tour to various countries from April through to August.

The first time we ever performed, we didn’t have much fun because we were trying to be all mysterious and subdued and “cool.” As soon as we realized we should embrace our excitableness, performing became the most fun thing ever. We love playing, no matter how many people show up. The fact that we now have bigger and bigger crowds and people know our music blows are minds! We feel so lucky and grateful every day.

Continuing through 2018, you guys had the chance to reveal one of the first tracks from your coming album Treehouse on Conan O’Brien‘s Conan O’Brien Presents: Team Coco show in early March titled ‘Baby I’m a Queen.’ Now in the first week of April you guys have released another track on the album ‘Batshit!’

As we can hear in ‘Batshit‘ and ‘Baby I’m A Queen’ this coming album is without a doubt going to be quite the wild and exciting ride! Presenting a powerful and continuously unique and impressive sound in both tracks, it’s evident that Treehouse is going to reach a whole other level of well-deserved praise.

Clearly 2018 has already been a very exciting year for the two of you! What was it like performing on Conan and ultimately putting together this new album?

Conan was really fun. That was one of the first TV appearances we did. It’s funny to do those things because, while the audience is pretty big, it still feels like an intimate show at the time! Everyone was really great, vibes on set were very strong 🙂

Finally, as a unique DJ and producing group with such creative style and vast musical tastes, do you have any advice for any aspiring artists, DJs, producers and/or groups out there?

Make what you want to hear! Don’t make music because you think other people might like it, make it because you love it!

I want to thank you Sophie and Tucker for taking the time to speak with me on behalf of EDM Joy! As one of my personal favorite artists of 2017, it will be great to see what Sofi Tukker drops as we continue through the new year!

Show some love and support for Sofi Tukker by following them via their socials, linked below! Don’t forget that you can catch them on tour at a variety of dates here. Check out their Apple TV spot from 2017, various music videos and more throughout today’s article! Finally, stream their new album, Treehouse on Spotify, which just dropped last week on April 13th!