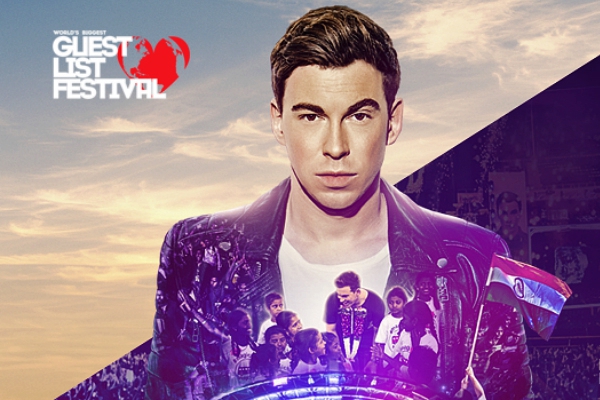 Hardwell – Guestlist – On December 13th, 2015 iconic dance music DJ and Producer Hardwell joined hands with India’s Guestlist4Good Social Enterprise and Mumbai based non-profit organisation Magic Bus, to stage an aid event that provided education for over 18,000 young underprivileged children living in India. The World’s Biggest Guestlist event captured the world’s attention and set a precedent within the electronic music community. Now, in 2017, Hardwell has pledged to return to Mumbai and headline the third day of the World’s Biggest Guestlist Festival, with the ambitious task of bringing a brighter future through education to more than 100,000 young children.

In cooperation with the GuestList4Good social enterprise and its founder Shailendra Singh, Hardwell and Anna Knaup (CEO of international electronic music agency Anna Agency) are coming together once again to deliver the third massive day of the World’s Biggest Guest List Festival (WBGLF), in association with Hardwell’s United We Are Foundation. Expanding from its previous inception, the now 3-day festival will cater for sports, live Bollywood and pop music, with Hardwell closing out the festival on Sunday, Dec 3 with a show called United We Are by Hardwell.

Titled United We Are by Hardwell, the show will see Hardwell, joined by some of his fellow DJ and producing friends, attempt to put attention back on to the subject of child education in India and place more awareness on the deprived conditions of the slums of Mumbai, that many of these young children have to live in day-to-day.

Working once again with the Magic Bus Programme, the World’s Biggest Guest List Festival will bring about positive social change in India by putting international awareness on the issue of education. The goal is very simple: kick-start an educational revolution that helps navigate children of the slums from childhood to adulthood by providing them with the tools to make their own social change later in life.

The World’s Biggest Guest List Festival is a Guestlist4Good initiative, in association with United We Are Foundation for day three of the festival and working together with NGO Magic Bus aim to create an event that will be a beacon for awareness and support as they work towards steering the lives of children towards a better life with better life skills, and better opportunities, in the journey from childhood to livelihood.