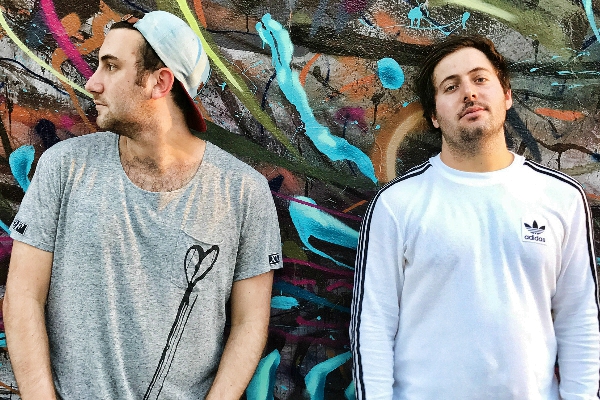 Hi Two Friends! For the past year, the two of you have been rising faster than ever, with a wide variety of eclectic releases, ranging from the successful and massive remix for Galantis’ track ‘No Money,’ original Exit Friendzone collaboration ‘Overdose‘ to remix of The Killers‘ production ‘Mr. Brightside.’

Reflecting on 2016, what are you guys most proud of achieving?

The biggest step in our career in 2016 was bringing in the live side. 2016 was our first “real” touring year where we were gone most weekends. It was an adventure and we felt immense satisfaction in being able to meet and hang with fans who have connected with our music.

Since 2017 has started, there has been an even bigger increase in the buzz around Two Friends. You guys have gained over 20 Hype Machine #1s throughout your career so far, you’ve garnered support from artist superstars The Chainsmokers, Tove Lo and Tiësto and you’ve recently been on an ongoing tour with tropical house producer Matoma and Australian duo The Aston Shuffle.

How has performing alongside Matoma and The Aston Shuffle been like across venues in Boston, Chicago and New York amongst others?

It’s been awesome. Both Matoma and The Aston Shuffle are great dudes and we’ve had a blast touring with them. Luckily we have a couple more later in march with them as well which will be super fun. It’s always cool experiencing multiple sets from other artists because you start to pick up on things and ways to make your own set better.

Creating some well-deserved hype, two tracks were delivered ahead of schedule for your forthcoming Out Of Love EP.

Expected for release on Feb 24th through Spinnin’ Records, the first couple of productions from the EP were already successful ‘Pacific Coast Highway‘ and ‘Out of Love,’ which both featured some good vibes, sax and a chilled back hybrid alternative and tropical house sound.

You guys have said that ‘Out of Love‘ was one of your favorite productions to work on because of how it came together. What was the creativity and influences that went into creating the rest of the EP?

So the other two songs on the EP definitely weren’t as smooth to completion. We wrote ‘Pacific Coast Highway‘ a few years ago, had a different singer until last summer, reproduced it too many times and just had a million headaches to get where it is now. We started ‘Mona Lisa Eyes‘ mid 2015 and then had the idea to get harmonica to give it some of those live elements we really like. Sat on that one for a bit as well!  All of the songs are so different besides the songwriting, this is probably due to the changing influences and inspirations over the last couple years.

This is only the tip of the iceberg when it comes to Two Friends and what you guys are capable of! Although this is just the beginning of 2017, you guys are already releasing your first EP of the year along with touring with DJs and producers Matoma and The Aston Shuffle.

Looking back at the beginning, what do you guys appreciate the most going through your musical journey in the eclectic soundscapes of the EDM industry and what would be your advice for aspiring fans and artists alike?

It’s cool how fast things change. It forces producers to be fresh and innovate. It also keeps your mind ready and willing to attempt new challenges. Even a couple years ago a “house” producer doing anything but 126-128 bpm was blasphemy. Now anything that sounds good floats for the most part. Similarly, our advice would be to do what sounds good and don’t think too hard about what it “is.” Keep grinding and it’ll get better 100% guaranteed.

Moving forward, what can fans expect of Two Friends past your tour and Out of Love EP?

So we got another Big Bootie Mix Vol. 11 coming soon, then another single we’re in love with. Probably some more remixes after that to bridge between the next originals. Then we’ll get back on the road after this tour as well. Super pumped, lots of goodies in the works and we can’t wait for them to make a splash!

I want to thank the both of you for giving me a chance to speak with you guys as Two Friends. With the massively global success that the early tracks of your EP have seen, I’m certain that fans all around the world will be eager to see what you guys have in store for them.

After having spoken with the guys some time ago, they have now released their new remix for Passion Pit, with their exhilarating take on the track. Below is what they had to say on that production!

We were going through an old Spotify playlist we had made in high school looking for dope songs to remix. When we saw ‘Sleepyhead‘ in there, we instantly knew it was the one. Such a fun, catchy, and at the time groundbreaking song to play with, and this has become one of our favorite remixes to play out at shows. The responses we’ve gotten on our recent string of originals have been truly humbling, and we thought it was a perfect time to drop this remix as we gear up for even more original music coming soon.

Make sure to show some love and support for Two Friends, check out their on-going tour and enjoy their highly exhilarating EP, along with their recently released remix of Passion Pit‘s ‘Sleepyhead‘!