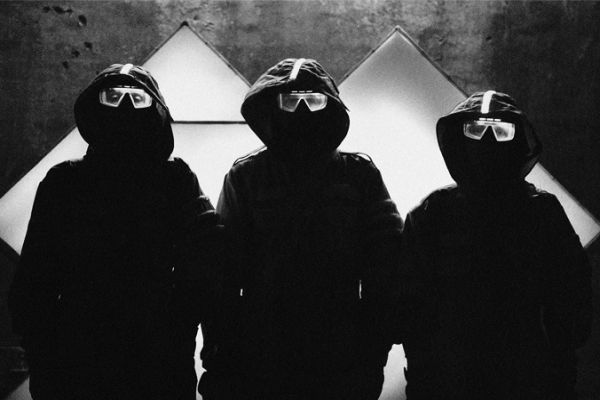 Hi guys! There was much anticipation for your long-awaited PANIC! LP, which encompassed a ten-track journey that channels the Gudrun von Laxenburg electric live performance sound smoothly. With familiar vibes for fans from groups like The Prodigy, The Chemical Brothers and Justice, it’s a tasteful compilation that we not only expected, but were also pleasantly impressed by!

Some of your guys’ stand out records on the LP are songs like ‘Moving Water‘ featuring Eloui, ‘Revolution‘ and ‘Just Can’t Get Enough‘ featuring Pressyes, which all helped build anticipation for your previously hyped PANIC!

What was your guys’ inspiration for these tracks and the rest of the album and what was the creative process that went into developing PANIC!?

Since we started out as a live band, it took us some time to figure out who we were as a band, especially in an album context. We worked tirelessly on finding our own sound and it was also a great task for us to compress the energy and power of our live shows onto a record! The human factor of playing instruments live and the fact that we edited as little as possible, led to a very dynamic and unique sound. The main goal was to deliver an electronic record with the raw power of live drums, guitarlike synthesizer licks and a load of punk-rock attitude! This is PANIC!

Panic! is filled with a wide range of eclectic sounds that fans from all spectrums of the EDM soundscapes can enjoy. From the electro crunching beats of ‘Planet of the Arps,’ the soft slow synth patterns of ‘Jonesys Lullaby‘ and pumping, bass heavy dancefloor offering ‘What Whoop‘ to the cinematic close of ‘The Return of the Unicorn,’ it’s without a doubt a gem of a musical journey.

Reflecting on PANIC!, how was the album launch in Austria and what are your three thoughts on how fans have received the LP?

The Album release in Austria went well! Our singles are on radio rotation, our music videos are competing at film festivals around the globe and we played a packed release-show at the Flex in Vienna! Basically we could not be happier at the moment! We also think that our fans appreciate what we tried to accomplish with this record and since we tried to compress our live show onto PANIC! I don’t think we should be disappointed.

As Gudrun von Laxenburg, the three of you have gone a long way since your early days. July, a jazz-trained drummer, Christoph a classically trained violinist, and Daniel a hard rock guitarist, it would seem that nothing can stop you guys from evolving as artists, DJs and producer.

You’ve made yourselves known in the live circuit, from your hometown in Austria all the way to the Atlantic.

What has the journey been like, touring all around the world?

Playing live is our strong suit and the good thing is that we love it as well! Hours of sitting in the tour bus can be exhausting, but it mostly pays off when you get on stage that night! We are also a family, traveling and partying together with our tour manager and light engineer Philipp and the sound engineer Norbert. We usually have a lot of good times on the road! The fact that you see different places all around Europe you would have never visited if it wasn’t for a “Gudrun” gig is of course another benefit of touring. We really feel it’s a privilege to be on the road doing what we love the most!

What can you guys tell us about the earlier days of forming your group and ultimately what Gudrun von Laxenburg has in store for the future?

We started out as a live band and in the beginning, we mainly played concerts around Austria and Germany! It was a weird thing for us to get all these bookings, because we hadn’t even released one track! It was just straight word of mouth. People have been talking about our shows and one thing led to another until we played major festivals in Austria! We then decided to take this band seriously and bring it to the next level by producing an album! Since then we’ve been constantly working on our music and on our live show. This is also what you can expect for the future. Stagnancy is the worst thing that can happen to musicians so we keep ourselves on the edge, always challenging ourselves to evolve! We are already working on new music and are planning our next tour! We hope there will be a lot of “Gudrun” in the future.

Finally unveiled, PANIC! is definitely set to take Gudrun von Laxenburg‘s talent to not just the dance music community, but the whole industry. Weaving together their incredible engineering, they’ve neatly packaged years of hard work and alongside Skint Records and Bmg, they’re making their awaited debut.

PANIC! will without a doubt stand as the stepping stone towards the incredible career ahead for Gudrun von Laxenburg. That said, I want to finally thank you three for taking the time to speak with me at EDM Joy today, and I can say confidently, that we definitely couldn’t be more inpatient about what’s to come!